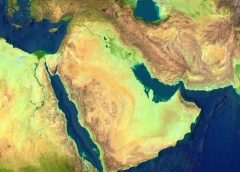 Islamic World is going through a relatively difficult and erratic period for the last couple of years as with the Arab Spring in the Middle East compared to the time before it broke out. People living under harsh conditions at the hands of their oppressive regimes took to the streets asking for their legitimate rights in peaceful manners. However, so-called Islamic governments responded with severe actions, which drove people to go against further and further until they took down the heads of their governments. Although the one in Syria has proved to be the hardest one so far, all the world is pretty sure that it will end up the same sooner or later.

Especially the incidents in Syria have made it very clear that the Islamic World should take lessons from what has happened in this geography. Syrian revolution has been like a surgery in the Muslim world’s body. The whole body is afflicted at the moment. So, we are now coming to know/remember some of the dire sicknesses facing Muslims and Islamic countries.

Unity is based upon common goals between parties. Unions such as United States of America, United Nations, European Union exemplify this reality, which is to prevail in the world at the expense of destroying others so as to live in wealth and welfare in this world. This is a worldly goal and depends basically on joint political and economic actions.

As for Muslims, knowing that we aim at happiness in both realms, we need to plan deeply than others. Our criteria is different than those of others since our success comes as a result of gaining the pleasure of Allah (swt), which requires seeking his pleasure over all other plans and strategies.

Now regarding the Syrian issue, if no Islamic country backs the Syrian people for fear of having domestic or international problems, Allah (swt) will not give ease to that country since He wouldn’t be pleased with its action. So, our criteria is the pleasure of Allah, not mere strategic plans. Pleasing Allah (swt) is the greatest strategy, because the keys to everything in the universe rest in His hands.

In this regard, success and welfare of Muslim countries reside in getting united in all fields and scales around Islamic principles. Remember the times when the Ottoman State ruled over the world maintaining peace and conveying the message of Islam everywhere. Nevertheless, it was divided into pieces and every piece is now groaning with pain. So, the way to return the health of the body is to reconnect them through maintaining unity between Muslim countries.

Considering the troubles in other Muslims geographies such as Arakan, East Turkistan, Palestine, Somalia, etc, it is settled clearly that Muslims should act like one body helping each other. Excluding one’s effort to his/her affairs and ignoring the spiritual bounds between Muslims are some of the sicknesses afflicting us. What lies at the root of these problems is the weakness of faith (iman) and moral collapse in Muslim societies. We should do what Prophet Muhammad (pbuh) did. He first placed firm belief in everyone’s heart and taught them good morality. Then, he based the Shari’ah upon these firm pillars.

May Allah (swt) grant us unity in hearts first and then unity in the Islamic World. Ameen.