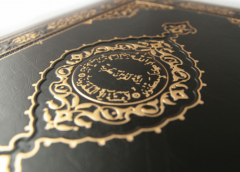 After occupying India the English have found some people that would support them and used those people for their own benefit. The most famous of them was Ahmad Aga Khan. The Queen of England gave this man the title “Sir” due to the activities he did at those times. In that period a group showed up who called themselves “Quraniyyun” that accepted nothing but the Qur’an as religious proof and denied the Sunnah.

We see that a similar thing also happened in a very similar way in Egypt after English occupation. The English, after occupying Egypt, made Muhammad Abduh the mufti of Egypt and head of Al-Azhar. Today everyone knows that Muhammad Abduh has joined Masonry. And again in those years people who brought the Qur’an into the forefront and denied the Sunnah have shown up.

The Quraniyyun movements that started in India and Egypt have a lot in common. It is rather meaningful that both movements have started just after the English occupation.

In recent years a group has shown up who call themselves Quranists and started to object that the Sunnah is a religious proof. These people are either enemies who are very intelligent or general public who lack knowledge and are unintelligent.

All Muslim scholars accepted the rejection of a mutawatir hadith as kufr (denial). For it is absolutely certain that a mutawatir hadith comes from our Prophet, the scholars said that rejecting these hadiths is equal to rejecting the Prophet. In this regard, it has to be accepted that those who deny the Sunnah in its totality become kafir (denier). (Mutawatir Hadith: a crowded group that can in no way tell a lie narrating hadiths to another crowded group like themselves. There is no doubt in these hadiths being told by our Prophet. For example, the five daily prayers have been practiced all the time since our Prophet’s era. In this respect, one who rejects the five daily prayers becomes a denier.)

Those who say “only Quran” and reject the Sunnah have not hesitated distorting the meanings of some verses of the Qur’an. They have put forward the verses below as evidence:

“We have sent down to you the Book as clarification for all things and as guidance and mercy and good tidings for the Muslims.” (16:89)

It is understood that these people see the verses serving their purpose and sweep aside others.

Let’s elaborate the weakness of their claim:

1. The first proof that the Sunnah is an evidence is the Qur’an

The verses that tell the Qur’an explains everything do not say that there is no need for the Sunnah. On the contrary, there are commands like “Obey the prophets!” in many verses of the Qur’an. These commands necessarily point to the fact that the Sunnah is among religious evidence to be followed. The Qur’an that describes and explains everything has also expounded this issue and commanded to obey the Prophet.

Let’s look at some verses about this issue:

“Say, [O Muhammad], ‘If you should love Allah, then follow me, [so] Allah will love you and forgive you your sins. And Allah is Forgiving and Merciful.’ * Say, ‘Obey Allah and the Messenger.’ But if they turn away – then indeed, Allah does not like the disbelievers.” (3:31-32)

Another verse is as follows: “O you who have believed, do not put [yourselves] before Allah and His Messenger but fear Allah. Indeed, Allah is Hearing and Knowing.” (49:1)

2. The second proof that the Sunnah is an evidence is the history

Claiming that the Sunnah is not an evidence in religion by giving false meaning to the verse is actually such an absurdity that it is pointless to even mention and talk about. However, today people are so confused that this absurdity can find supporters.

The Qur’an was revealed to our Prophet 1400 years ago and he conveyed it to the people around him. The people around him – the Sahabas – reached about 124 thousand in the course of time. From our Prophet’s time to today all Muslims are in agreement that the Qur’an is the first source of the religion. The second source after the Qur’an is the Sunnah. There has been no dispute among Muslims on this issue.

Then we need to ask the following question: Let’s say the Prophet understood the Qur’an wrongly, then why didn’t Allah warn His prophet that he understood it wrongly? However, Allah corrected a minor mistake of our Prophet immediately when he made it as we know from Surah Abasa. But when our Prophet encouraged his ummah to follow his Sunnah, no verse was revealed telling that he was making a mistake.

Now I wonder whether these people go a step further and accuse Allah! If they do so, doesn’t this show that they do not have faith in reality?

The claim “Even the Prophet did not understand the Qur’an but I did” is absurd and nonsense not worthy of talk, but for some reason it has had followers in this time.

One of the duties of the Prophet is to explain

Just as our Prophet is charged with conveying the verses he was revealed, similarly he was also charged with explaining and expounding those verses. For instance in one verse it is said “We revealed to you the message that you may make clear to the people what was sent down to them and that they might give thought.” (16:44)

As a result, we can say the following:

A Life Full of Miracles and Its Messages to Us