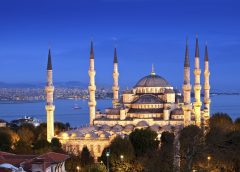 This museum, located at the exact battle field and close to the tent of the Sultan Muhammad al-Fatih, is the fruit of a scholarly research and artistically hard work. You will see it when you visit inshaAllah.

Whenever I go there, I do remind myself of this and share it with students and friends. You can make your own way of storifying or another way of motivating the children. They need to imagine themselves as if they are in the illustrated battlefield. Here is the gist of my way of telling:

“Soldiers here we see are selfless as millions of others in our victorious history and the cause is magnificent. Sultan Muhammad al-Fatih was very young when he conquered the much awaited and beloved city foretold in the hadith. His aim was to seek the pleasure of Allah (subhanahu wa taala). He planned and studied his plan for years. Each of us must have an aim to achieve. Each of us must have a project to offer to the Muslim world, each of us should have a plan to introduce a good amount of goodness to humanity.

And some other stories and statistics would be very nice to motivate children to work hard for the ummah. I’m sure, biidhnillah, you will enjoy the place.

2. Abu Ayyub al-Ansari Masjid (in the district of Eyup)

Sahaba Abu Ayyub al-Ansari (ra) was amongst the first soldiers to visit Istanbul for operational reasons and he was martyred very close to the city walls back in the day. Before his shahadah, he asked his companions to tie him to his horse, take him to the nearest place to the heart of the ancient city Istanbul, the aimed city, and bury him there and this was what they did. His idea was “Even if I can’t conquer what Prophet said, I did to my very best,” at the age of 93 or so. SubhanAllah, what a motivation! His burial place was discovered in a dream later on. Fajr prayer at Abu Ayyub al-Ansari’s place is fantastic and highly recommended.

Join jamaah here during a Friday prayer if you can. It is such a great pleasure to pray with so many Muslims in this beautiful mosque.

It was transformed into a masjid during the time of Muhammad al-Fatih to represent that Istanbul is Muslim forever. He entrusted it as a waqf mulk (property of the Ayasofya Trust). Unfortunately it was made into a museum.

It is a purpose built church, honoured with minarets and elevated into the status of a masjid later on and now serves as a museum. Good news is that, hopefully, in the near future, this is going to be the landmark and a great masjid of Islam again. We need to work hard some more time.

5. Topkapi Palace and the Museum of Science in Islam

You well know it. Holy belongings of the Prophet (saw) and all other royal armours and all that are in Topkapi Palace. http://topkapisarayi.gov.tr/en

6. Istanbul Museum of History of Science and Technology in Islam

This museum is very close to Topkapi Palace. Within the combination of this spiritually uplifting and motivational programme a quick visit would benefit as well, especially children.

It is about the Islamic discoveries in the past. The museum located at the Gülhane Parkı (meaning Rose Garden).The Museum of History of Science and Technology in Islam was originally built in Germany by probably the most famous Islamic history of science Professor Fuat Sezgin. President Recep Tayyip Erdogan, then Prime Minister, had asked him to build the same museum in Turkey. Thanks to his kindness, he did a similar one in Istanbul. A must see! (A new website for the museum: http://www.ibttm.org/ENG/index.html)

In this masjid 4 of 28 sahabas (radiallahu anhum)* are said to be buried here to the best of my knowledge. One may see the tombs of the rest on the tour around the old city area along the walls and can feel their spirituality and energy in many corners as long as they keep themselves wudhu-ed up at all times and eyes guarded from haram visions.

In the Underground (Yeralti) Masjid, Amr b Al’a, Amr bin ‘As and Wahb bin Husayra and Sufyan bin Uyayna are the ones I know of. Again this is quite close to Sultan Ahmad Mosque.

*Among these four famous hadith collectors, fiqh experts and soldier sahabas, one may not be a sahaba but am not sure who that is.