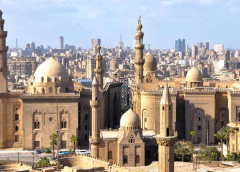 Imam Sharani was one of the great awliya of Egypt and an imam of Islamic law of the Shafii School. His given name was Abdulwahhab. He was born in 1491 AD (898 AH). He was descended from the Prophet Muhammad (PBUH).

Imam Sharani began his academic life in Cairo while he was still very young. He was intelligent and hardworking. He memorized the Qur’an by the age of seven. He also memorized most of the books he studied in his lessons.

Sharani frequented the circles of knowledge and took lessons from various imams. Later he added a complete list of the great imams whose knowledge he had benefited from, at the end of his book Tabaqat. With that he in a sense showed his faithfulness to his teachers.

Sharani became competent in knowledge of hadith and Islamic law at a young age. Ali al-Hawas and Sayyed Ibrahim ed-Dusuki were among his famous teachers.

When it was asked of him how he entered the path of Sufism and how he proceeded, and who brought him to it, he answered, “I initially learned the way of Sufism from Khidr, alayhi’s-salam and my master Ali al-Hawas. First I firmly believed in and submitted to them. I did whatever they commanded. I struggled against my soul for years; and disciplined it by doing the things it did not want to do. I did so to the extent that I used to tie a rope to the ceiling of my room, put it around my neck, and worship my Lord. When I felt sleepy, I wanted to lie down; but the rope around my neck prevented me, so I had to continue the worship. As I avoided the prohibited (haram), I also left what was superfluous of the permissible (mubah). When I had nothing to eat, I did not want anything from anyone, but instead I ate grass. I did not even pass by the shadows of the governors’ mansions and the houses of the Sultan’s men; I used to change my direction. I obeyed the commands and prohibitions of the religion as much as I could. And Allah (SWT) bestowed upon me the pleasure of performing acts of worship.” (Al-Mizan al-Kubra)

Allah bestowed upon Imam Sharani many spiritual bounties. Some of them are as follows:

“O my Lord Who gives the sustenance of the inanimate, the animal, the plant and everything! O You, Who never forgets to give food to the creatures, and Who never stops giving bounties even to the ones who rebel! You are exalted above any imperfection and defect,” recited a fish in an ocean.

The ones who spoke out against Imam Sharani were warned in their dreams, and they stopped being against him.

Imam Sharani, an heir of our Prophet regarding the science of exterior (ilm az-zahir) and the science of interior (ilm al-batin), raised many students. His madrasa (school) was as busy as a beehive. Students came in huge numbers from all around the district, and they studied hard to benefit from Imam Sharani’s knowledge. He taught his students both ilm az-zahir and ilm al-batin. His typical characteristic was that he used to compare similar aspects of the Islamic schools of law, and that he used to narrate many hadiths about the End Times, the Doomsday and Mahdi.

One of the scholars of the last period of the Ottomans, Manastirli Ismail Hakki, said the following about Imam Sharani and his works: “This person was a marvellous scholar like Imam Ghazali, and he had uncommonly deep knowledge in the science of exterior and interior. Many of his unique works were published in Egypt. All of them have been admired by the great scholars. However, especially his books Mizan al-Kubra, Lataif al-Minan, and Al-Yawaqit wal Jawaher are worth giving one’s life for”.

Imam Sharani wrote more than 300 books. The most valuable of them is “Mizan al-Kubra” which comprises the knowledge of all the four Islamic schools of law. Another precious book is “Tabakat al-Kubra”. This is a valuable book which includes the manners, wonders and words of more than four hundred great scholars and saints beginning from Asr al-Sa’adah (the Age of Bliss).

Imam Sharani foretold that the Ottoman Sultan Selim the Grim would conquer Egypt and spoke in praise of him. Imam Sharani passed away in Egypt in 1566 leaving behind hundreds of books and thousands of students.

May Allah keep us in the path of those blessed imams!

Lack of awareness of the Spiritual Bonds between Muslims