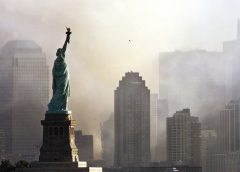 2011 is the tenth year of those sinister 9/11 attacks in American soil which caused everything to change after the events. As it is expected the analytical articles and TV shows on the last decade which was marked by these events are being published and aired because the effects of the events are still being felt in our lives and it seems we will feel compelled to talk and discuss on the issue in the future as well.

The first and shocking consequence of the mentioned terror attacks was to see that US discarded the values such as democracy, pluralism, diversity and tolerance easily that it defended as indispensable components of liberal democracy, and what is more, it launched the war on terror and violated these values under the guise of spreading them. The intimidation and anxiety that Muslims in US felt were overwhelming and those abuses were generally censured or overlooked by mainstream media. Extended authorization for using ‘enhanced interrogation methods’, which are indeed torture, given to security and intelligence officers for interrogation of suspects caused many innocent people to claim the acts whom they are accused of doing, which actually they did not have any idea about just to get rid of coercion. The interrogation of suspects on planes flying over the oceans or in third world countries jails through their intelligence service members shattered badly the image of USA. The scandalous and shameful pictures releasing from Abi Ghraib prison and the inhumane treatment of prisoners in Guantanamo Bay detention camp have been phantoms haunting Muslim minds since then.

The other important issue that faced Muslims after terror attacks was Islamophobia spectre stalking all over the world especially in the West. In 1997, an independent think tank on ethnicity and cultural diversity, the Runnymede Trust, coined the term “Islamophobia” to describe what they saw as a prejudice rooted in the “different” physical appearance of Muslims as well as an intolerance of their religious and cultural beliefs (The Future of Islam, John L. Esposito, Oxford, 2010). After 9/11 with common efforts of far-right wing political movements, organizations and radical “experts of Islam” there has been an incredible rise in Islamophobia. Beyond that, a report titled “Fear Inc., The Roots of the Islamophobia Network in America” published recently by Centre for American Progress revealed an Islamophobia network which fabricates a wide array of mischaracterized information about a non-existent threat of Islam and Muslims in America. ‘It is not a vast right-wing conspiracy behind the rise of Islamophobia in our nation but rather a small, tightly networked group of misinformation experts guiding an effort that reaches millions of Americans through effective advocates, media partners, and grassroots organizing, that this in-depth investigation reveals,’ says the report (For further information: Fear Inc. collapsed in Turkey; and will collapse in the US). Due to the fear about Muslims which was spread in the Western countries, people reacted negatively to all sorts of public appearance of Islamic symbols. Women in hijab, minarets, mosques and bearded men have become the subjects of controversies in US and Europe during all last decade and they were abused by the right wing parties for political reasons. All this psychological war process against non-existent Muslim threat and their symbols traumatized and got anxious the ordinary Westerners about their identity and future and the anxiety peaked and broke out in a terrorist attack perpetrated by a far rightist ethnic Norwegian named Anders Behring Breivik to draw politicians’ attention Muslim threat to Europe, in which 69 people, mostly teenagers, were killed. For now it is not certain whether any lessons drawn from that tragic event or not, but the reactions of the Western journalists aftermath of the event by expressing prejudiced estimations attaching the attack to Muslims and even after it turned that attack was perpetrated by a white European man their evasive comments which were far away from diagnosing the roots of problem were not hopeful about future.

Taking advantage of widespread ignorance of Westerners about Islam the USA and European governments, intellectuals and journalists simplified, stereotyped and caricaturized the religion of Islam and Muslims and they overlooked the magnificent history of Islamic civilization and the contribution that it did to European modernization. Those who were aware of unfair perceptions about Islam either could not make heard their voices or preferred to keep silence on purpose and sometimes, unfortunately, distorted the facts to mislead the public opinion for short-sighted interests. Either way, the Westerners came out of the process badly damaged during all these tribulations and manipulations since 9/11.