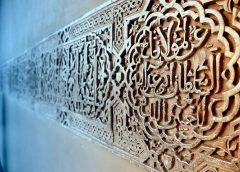 History of Conquest of Iberian Peninsula

Al-Andalus was the Muslim territory in the Iberian Peninsula and is known for being the center of tolerance in Europe during the dark Middle Ages, times of many religious and political strife. The name of the territory means in Arabic “Land of Vandals” and was applied to most of the Iberian Peninsula, even entire of it.

The conquest of the Iberian Peninsula took place during the Umayyad dynasty in 711. In 710, Musa b. Nusayr, the governor of Ifriqiyah (the name for North Africa from Libya to Atlantic) of Umayyad Caliphate, sent one of his officers, Tarif, to Iberian Peninsula for an exploratory mission. The success of Tarif in occupying lands and collecting huge amount of booty from Iberia was one of the reasons why Nusayr gave further orders for conquering more lands in Iberian Peninsula. Beside the success of Tarif, according to some medieval historians such as Ibn al-Qutiyah and Abd al-Hakam, Julian, who was former governor of Ceuta during the reign of the Byzantine and Vizigoths, wanted help of Nusayr to save them from the pressure of Vizigoths. These incentives have motivated Nusayr to deploy an army of around seven thousands soldiers aiming of further conquest of Iberian Peninsula. The lieutenant Tariq b. Ziyad left Tangier as the head of the army and crossed the strait of Gibraltar, which is named after him. When landed, he stated that there was no escape except in triumph: “Whither can you fly? The enemy is before you and the sea behind you!” according to his oration. Tariq’s small and successful invasion paved the way for conquest of whole Iberia and the transformation of it into Al-Andalus.[1]

The importance of Al-Andalus for today is that it shows us people with different religious affiliations can live together on the basis of humanitarian values (convivencia). There were Muslims, Jews, and Christians who lived together peacefully relative to any other place in the world at that time. Since the control over the region was in the hands of Muslim rulers, it is better to analyze the issue of tolerance from the viewpoint of Islam.

For Muslims, the Qur’an and Sunnah of Prophet Muhammad (pbuh) are the highest authority in the making of the rules. This tolerance towards non-Muslims, of course, stems from them. There are many verses of the Qur’an and hadiths that determine the attitude of Muslims in the social life.

The verse of “There shall be no compulsion in [acceptance of] religion” (Al-Baqara: 256) implies that nobody can be forced to convert and accept Islam. This principle was very well practiced in Al-Andalus because there are historical notary records in which whoever wants to change the religion and become a Muslim, there was a principle that those people should be mentally healthy and not be forced to do it. The consent should be declared explicitly otherwise, the converting to Islam became illegal.[2]

Another verse of the Qur’an, “Allah does not forbid you from those who do not fight you because of religion and do not expel you from your homes – from being righteous toward them and acting justly toward them. Indeed, Allah loves those who act justly.” (Al-Mumtahanah; 8), determines a principle of behavior toward other people irrespective of their religion stating that be kind to those who are kind to you as long as they do not harm you because this is what justice requires.

Non-Muslims are called as ‘dhimmi’ in Islam, which means “protected person”. They have certain rights of which many are same as Muslims and duties such as paying jizya and kharaj. Also, the Messenger of Allah (pbuh) wrote to the people of Yemen: ‘Whoever is adamant upon Judaism or Christianity will not be tormented for it, and he is obliged to pay the jizya.’[3]

This shows that dhimmis are free to practice their religions in the lands of Muslim; however, they will have certain duties. In the light of this principle, we see the tolerance of Muslim over non-Muslims. For instance, the philosopher Maimonides (Musa ibn Maymun) stated that Islam allowed the Jews to flourish in Spain and wrote that “Judaism probably welcomed the conquest of Spain by the Muslims in 711. With the Muslim conquest began a Golden Age of freedom and tolerance for Jews. They freely entered the fields of government, science, medicine, and literature.” [4]

One of their rights is the right to privacy, meaning that they are independent from Muslim authorities in resolving problems between them. However, in exchange of this right, they accepted the Muslim authorities as the highest resort in resolving conflicts with Muslims. This right of privacy does not mean that there is a strict physical separation between different communities in terms of settlement, that is, different religious groups can live in the same district.[5]

They also have to pay special taxes apart from Muslims, namely jizya paid for the exchange of having certain rights and kharaj paid by who have lands. Muslim rulers or officers should have good manner in collecting these taxes as jurist Abu Yusuf rules “No one of the people of the dhimma should be beaten in order to exact payment of the jizya, nor made to stand in the hot sun, nor should hateful things be inflicted upon their bodies, or anything of that sort. Rather they should be treated with leniency.”[6]

‘Convivencia’ or coexistence was maintained in Al-Andalus until the beginning of attacks and invasions of the Christian states in the north.[7]

The non-Muslims were free to live their religion as long as they are respectful to Muslims. Muslims were not allowed to consider or behave them as a second-class citizens because as the Messenger of Allah (pbuh) said: “He who hurts a dhimmi hurts me, and he who hurts me annoys Allah.”[8], and “He who harms a person under covenant, or charged him more than he can, I will argue against him on the Day of Judgement.”[9], it is forbidden to harm anybody. It is against the Sharia’ Law.

As a result, Al-Andalus is the remarkable example of that how a tolerated society with peace and harmony can be formed when the rules of the Qur’an and Prophet Muhammad (pbuh) are genuinely followed.

[4]. Beig, Maryam Noor, “Andalusia When It Was…”, accessed March 3, 2016 http://www.hispanicmuslims.com/andalusia/andalusia.html,

[8]. Reported by al-Tabarani in Al-awsat on good authority

3 thoughts on “Tolerance in Islam: the case of Al-Andalus”