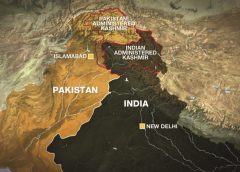 So much for Ban Ki-moon’s heart and possibly even more so his soul!  One can only recall the quote in Matthew and the betrayal of Jesus, “When Pilate saw that he was accomplishing nothing, but rather that a riot was starting, he took water and washed his hands in front of the crowd, saying, “I am innocent of this Man’s blood; see to that yourselves.”

The United Nations has walked away from the slaughter in Kashmir and washed its hands of it, and the world body has told India, “It’s your problem. See to that yourselves.”  Even the U.S. State Department spokesman John Kirby has deferred all inquiries about the “killing fields” of Kashmir to the Indian government, the very source of all the bloodshed. That’s like referring the problem of foxes in the henhouse to Chief Minister Fox.

Chief Minister Mehbooba Mufti, who has apparently been sitting in her boudoir, blames the source of the problem on “elements,” while hundreds of thousands of Kashmiris are in the streets demanding Azadi (freedom) and telling India to get out.

“They (youth) are angry and I can understand their anger. We are looking forward to a better future for them by exploring ways and means of providing them productive employment,” Ms Mufti said. Perhaps she should get her hijab out of her eyes.

The pro-freedom leadership, including Syed Ali Geelani, Mirwaiz Umar Farooq, and Mohammad Yasin Malik, were detained by the police and were not able to go out of their houses. Nevertheless, Mirwaiz Umar Farooq managed to release a videotaped statement:

“The Kashmir issue is not about governance or economic packages or economic incentives.  You have to understand the fact that today the youth of Kashmir are dying on the streets, not asking for jobs and books.  What is the actual issue?  It is the issue of the people’s right – the right to self-determination.”

Syed Ali Geelani has appealed the people to maintain discipline, communal harmony and not to damage police stations and ambulances. Muhammad Yasin Malik has asked its sympathizers and other people to “enhance their efforts and provide help and relief to the victims of the state sponsored violence.”

The killing of Burhan Wani, who had never shot anyone himself, but who had become an icon of the youth-driven demand for self-determination through his brave voice, was possibly the very worst thing India could have done if it had wanted peace with Kashmir. As the slogan that has now become viral on social media declares, “We want Azadi and nothing else but Azadi.” India has become its own worst enemy.

The U.S. does nothing

Meanwhile the U.S., the sole superpower in the world which must bear the responsibility for setting the moral tone through disciplined and rightful leadership, sits back and does nothing.  Such a behavior poorly disguises the financial incentives that have opened India up to USD 500 billion in American investment during the coming five years.  Would the U.S. not sacrifice even one dollar for a Kashmiri life, people are asking?

Lack of concern about the matter is reflected in the U.S. State Department’s Human Rights Report which has not and does not keep official records on killings by Indian forces in Kashmir occurring under the Armed Forces Special Protection Act (AFSPA).  They don’t track them.

Yet its own website, while alluding to the Universal Declaration of Human Rights,  declares so glibly,  “We see it as fundamental to our own interests to support a just peace around the world — one in which individuals, and not just nations, are granted the fundamental rights that they deserve.” By such willful choice to remain silent, the U.S. is in fact declaring that Kashmiris have no fundamental rights and do not deserve them.

By the most recent count provided by local media, 35 innocent people have been killed and more than 1500 injured by indiscriminate firing by Indian security forces in the valley of Kashmir in just three days when hundreds of thousands of people were protesting peacefully on the streets in various towns of the Valley of Kashmir. This is cold-blooded murder.

Kashmir which is known as the paradise has been turned into hell by the occupation forces. And the irony is that these forces are immune from any prosecution under special draconian laws like the Armed Forces Special Powers Act (AFSPA).

The youth of Kashmir clearly have little faith in or respect for the so-called Indian democracy, and India hasn’t the slightest idea how to earn it.  Its solution to the anger of people crying for freedom and a respite, at the very least, from the terror of 700,000 troops, is to clamp down even harder, adding to the death toll of such a policy that now approaches the six-figure range.

These were just peaceful protests in almost every small and large towns of the Valley of Kashmir, chanting the slogans of Azadi, justice and human rights. Srinagar city was put under curfew but the people came out on the streets, defied the curfew and lodged peaceful protests against the killings of innocent people. Kashmir is back to the same square one. Killings, curfews, chaos, confusion, turmoil, uncertainty and dark nights!  There is suffering everywhere. There is darkness everywhere.

But the situation in 2016 is totally different from the past. It is a youth driven mass movement with social media savvy. They are educated and enthusiastic to achieve their birthright — the right to self-determination; the right to decide that was pledged to them by India, Pakistan and the world community.  Unfortunately, these promises remained unfulfilled until today.

The desire for self-determination is the one very big “element” India should be concerned about, yet continues to pretend to the world that it does not exist.  However long India refuses to acknowledge it, the decades-old movement in Kashmir will not simply die out.

The Modi government is so arrogant that it does not seem to be mindful about the happenings in the Valley. The Prime Minister, who on July 12th 2016 convened a special meeting with Indian ministers and other officials to review the situation, was reported to be “unhappy.”  He blamed the media for turning Burhan Wani into a hero, a young man, he said, who was guilty of terrorist activity and attempting to “disintegrate” the country.

Such a bad day for Narendra Modi!  May be he did not read New York Times dated July 10th 2016 which quoted Syed Ata Hasnain, a retired Indian Army General who spent more than two decades serving in Kashmir and who said, “He (Burhan Wani) was not personally associated with violence so much, but was associated with leadership.”

Syed Ata Hasnain also said Mr Wani had “conveyed the message of Azadi,” or freedom, a word that has been a battle cry in Kashmir for decades. Perhaps the Rashtriya Swayamsevak Sangh (RSS) should send a delegation to comfort the Prime Minister.

And perhaps it’s time that President Obama and the United States wake up and smell the teargas.

One thought on “Kashmir:  trouble in Paradise”