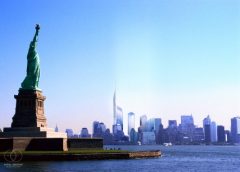 9/11 was a turning point both for the Muslim World and the West. Nothing has been the same since then.

American madness has not come to an end with Obama, but it has changed its dimension. A ‘Global psychological and physical war against Muslims began and it stills continues! It was mostly abolished in Turkey after a decade that it was put in stage.

Everything is not in order in Turkey yet. As Davutoglu says, “Only a master can change the places of the stones without collapsing the wall.”

The bloody event by Breivik in Norway in July 22 has changed everything as we have known after September 11.  A new formula joined the equation. The Europe encouraging the caricature crisis has sadly seen that actually it has been caricatured. It has personally witnessed the most severe result of Islamophobia. It shook and shuddered! We will see how much it has taken lessons from this when the crisis is over!

While we are busy with the tiny Holland, Russia and China continued and still continues carrying out Islamophobic terror. We should not overlook it!

Now, all these factors should be analyzed once more. And the Islamic world should see what it has done and what it has not. It should do self-criticism bravely. And this should start with questioning the mechanisms of “right invitation” and “effective representation!”

The quite new 130-page report, “Fear, Inc. The Roots of the Islamophobia Network in America” by Center for American Progress (CAP), one of whose founders is the President of USA Barack Obama is quite enlightening and proves the aforementioned things to be true. (see the complete report)

I think it was because of the Eid rush that the report has not been mentioned enough in our media. Ali Akel from the daily Yeni Şafak analyzed the report with two respective articles titled “Islamophobia Network in America” and “Slander, disinformation and complot”. It is evident that he lived in Washington, D.C. and suffered from the event because he could deeply analyze the report and highlight the important parts enriching with his own insights and experience.

The report reminds us the “Fear Inc.” in Turkey which is the motherland of Islamophobia. The backers of the dark gangs have not come to surface yet. We’ll wait and see…

Fehmi Koru wrote who turned the incidents of 9/11 into opportunity in his book “11 Eylül o kader sabahı… (September 11, the morning of destiny…) which he describes as “My September 11 Diary” (Timaş Pub., 2002) If we look back, we can see that lots of things in this extraordinary diary have come true. The year is 2011 and nothing in the heartily written novel of Robert Ferrigno “Prayers for the Assassin” similar to the Republic Protests has come true. The call for prayer does not echo in the streets of New York. Even the Mosque could not be built at Ground Zero. I have visited numerous times and personally listened to the Muslims there, they are still worried and sometimes frightened. The book We are All Suspects Now (Beacon Press, Boston, 2005)” compiling the interviews with the Muslims after September 11 by Tram Nguyen clearly depicts the years of terror experienced by the American Muslims after 9/11.

Does the madness end?  The frequenters of ‘Tea Party’ and the shareholders of Fear Inc. who immediately speculated about the events in Norway end up badly. The terrorist tuned out to be a Christian! All the estimations are changing now. All the things known changes and will continue changing.

All those prejudices and traps can be stopped. But unfortunately Obama has not been a brave president and he could not make the American society overcome this trail of fear. In his book Obama’s Wars (NY 2010) The Washington Post editor and Pulitzer winner with his study on the incidents of 9/11 Bob Woodward tells in detail with which power centers Obama struggled. And to see who have the real power, it is enough to read “The Israel Lobby and U.S. Foreign Policy” by John j. Mearsheimer and Stephen M. Waltz who have experienced grave results for writing it.

If you would like to have a quick understanding of how the west and the Islamic wold see one another, the historical and sociological roots and sensitive points which are well known and frequently used by some centers, have a look at “İslâm ve Batı (Islam and the West)” (İsam Pub., İstanbul, March 2008) by Ibrahim Kalın winner of 2007 Writers Union of Turkey Idea Prize. And for the Turkey reflection West’s viewpoint you can read “Türk Korkusu (Fear of Turks/Turcophobia)” (Doğan Kitap Pub., March 2008)  by Özlem Kumrular.