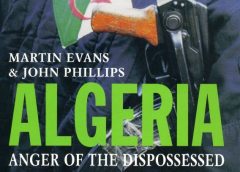 With NATO air support the insurgents in Libya has toppled the Gaddafi regime and Gaddafi’s whereabouts is unknown for now (31 August 2011) but it has been reported that Gaddafi’s family (wife, daughter and brides) has taken refuge in Algeria. Robert Fisk from Independent says “For years, the Algerians have supported Gaddafi’s independent – albeit crazed – policies because their own history has taught them to never accept orders from abroad. The moment the French – occupiers, colonisers and persecutors of Algeria for 132 years – bombed Libya, the Gaddafi regime’s struggle to survive became a re-enactment of the Algerian FLN’s 1954-62 battle for freedom against French rule. ” (Independent, Robert Fisk: Algeria sends the West a message by taking in Gaddafi’s brood, 31 August 2011). However in later years the military junta in Algeria which barred the Islamist Front Islamique du Salute (FIS) from taking power in 1991 election was backed or at least overlooked by the West. And now the regime in the country has understood that the old-type authoritarian regimes will no longer be allowed in the region and its goose also has been cooked. Algeria defies the West that it will not consent to the fate which is destined for it by the West.

A book from Yale University Press titled Algeria: Anger of the dispossessed written by Martin Evans and John Phillips sheds light into the political history of Algeria and the civil war in the country not just through the prism of secularist regime versus ‘religious fundamentalists’ but mirroring the social and economic insufficiencies and injustice, corruption and authoritarianism in government feeding the violent feelings in masses. After the popular Islamic revolution in Iran in 1979 there had been a rising tide in Islamic movements in all around the Islamic world. Taliban has strengthened its position in Afghanistan and Saudi Arabia was evangelizing its Wahhabi ideology through its funding all around the Islamic world thanks to welfare coming from its oil reserves.

One of these countries who were influenced by ‘Saudi-type wahhabi Islam’ was Algeria. Combined with combatants’ warfare skills returning from Afghan-Soviet war, Islamic opposition in Algeria gained popularity in the eyes of large masses and unemployed pessimistic youth against corrupt regime which had distanced itself from the ideals that all country had fought for during the independence war against France. This popular Islamic opposition might have been functional to transform the state apparatus into being more participatory, and justice in distribution of economic sources to be provided if the military had not prevented second phase of the elections in 1991 in which FIS appeared to gain a sweeping victory.

What was right and useful did not happen and FIS launched an armed fight against junta. USA and France gave little trivial reprimands just to give lip service which were perceived by junta we are backing up you. In fact, the threatening discourse against the individual freedoms that FIS was using before elections made all this process compelling, if not legitimate. The result was a ferocious civil war from 1992 to 1998 which cost two hundred thousand peoples’ lives. The authors’ close inspection on the war and the doubts which were cast about whether the massacres were perpetrated by counter-terror militia of state or FIS and its offsprings. The depiction of the complicated events of the era by the authors deserves appreciation because this civil war was being exploited to intimidate people and get the support of the west in semi-authoritarian regimes like Turkey. However; the brief and quick portrayal of independence war that Algerians fought against France in which 1.5 million Algerians lost their lives was disappointing.

In general the book is an excellent introduction for those who are interested in late history of Algeria. It is strongly recommended to witness and perceive the fury and disillusionment of a nation which could achieve to be neither European nor Islamic and which is seemingly sovereign but indeed self-colonized.

Besides for those who are interested in Independence war of Algeria the immortal 1966 work of Gillo Pontecorvo The Battle of Algiers deserves watching.

*The Wretched of the Earth (French Les Damnés de la Terre, first published 1961) is Frantz Fanon’s most famous work, written during and regarding the Algerian struggle for independence from colonial rule.