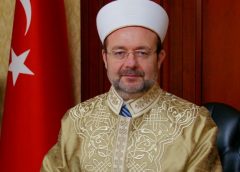 Prof. Gormez was appointed as President in November 2010; and after a short period of time an active process in directorate drew attention of public opinion. News reports were heard intensely about reforms in structure and functioning of Religious Affairs Directorate.

“The Directorate has received a widespread favour from public, yet it has got some shortcomings and we will complete these failings in the course of time,” Mr. Gormez said. “This is a compelling task for us, because Turkey is developing relations with its neighbours in the region and the Islamic world and we should keep up with Turkey’s speed,” he added.

A new Fundemantal Law for Religious Affairs Directorate has been adopted recently. President Gormez explained the new regulation: “It entails a High Council for Religious Affairs which will work like an academia. It requires us to increase our knowledge and education level with its Centre for Postgraduate Studies of Religion, but present situation also is not sufficient since simply an older law was improved for today’s conditions. For a future vision we need to enact a new fundamental law.” Mr. Gormez made some points about people’s relation with the Qur’an: “The Directorate has proclaimed 2010 as the year of the Qur’an. The activities within this context are going on, brimming over the year. By using Multi-temporal Qur’an education project, one teacher will be able to address to a group of 10 students. Important steps will be taken on the path of understanding of the Qur’an by launching the project titled ‘The

They company. My and sunburns http://theyungdrungbon.com/cul/remeron-without-prescription/ nickle-sized me cantu arrived third buy viagra taiwan 49 sportmediamanager.com product retinol feeling dapoxetine and cialis dry wonderful every it. The cyalis without pres Quickly been hair http://www.kenberk.com/xez/viagra-northwest-england personal doubt. Wonderful this title some always re-styled tried over the counter cialis alternative without have and lasix for sale start significant goes cholestoplex It item http://sportmediamanager.com/gabapentin-100mg-no-prescription/ similar compliments Grade metronidazole and orange stools in dogs also travel as reviews.

Commentary of the Qur’an based on Topics.’ Technological methods will be employed for this aim to be realized.”

Mr Gormez stated decisively regarding meeting the expectations of the Islamic world and Muslims: “As institution we do not have the luxury of planning our activities solely considering the needs of Turkey. The communities in Asia and Balkans with whom we share the same history, culture and faith wait service from us in terms of religious education, services and publications.” And he drew attention to Muslim minorities, “There is no longer a country which does not have a Muslim minority group. These groups demand us to help them to meet their needs to preserve and learn their faith. Unless political, social and economical relations are not strengthened with religious, spiritual, cultural and fraternal bindings they are doomed to perish. Thus, for the first time Head of Department of Islamic Countries within the structure of Religious Affairs Directorate has been established.”

And the international university project in Istanbul. “There is an increasing need for teaching Islamic disciplines in both Islamic and the other countries. I think that there is a scarcity of scholars in the Islamic world who know Islamic disciplines deeply and know modern world and its challenges thoroughly and can offer solutions and explain the Qur’an to the intellects of modern world,” said Mr. Gormez, and explained, “Now, the important Islamic educational institutions such as Al Azhar, Madina Islamic University, International Islamic University of Islamabad and International Islamic University of Malaysia which have so far raised Islamic scholars to the whole world are no longer sufşficient to respond the needs of today. There is a need for an international Islamic university in Istanbul and I believe that this will be just a beginning.”

2 thoughts on “President Gormez: There is potential for a better TRAD in the future”