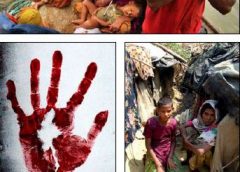 Until 1784, the Rohingya Islamic Sultanate, which was founded just 23 years after the conquest of Istanbul (1476), was ruled by 26 kings. It was then occupied by Burma between the years 1784 and 1823. The Burmese government oppressed both Muslim Rohingyans and Buddhist Rakhine people and thousands of Rohingyans had to migrate to India. After the years of British occupation (1823-1937), the Burmese government staged a dark plot with the coordination of the British to make sure that Rohingya could not become an independent state. The Burmese government provoked the Rohingyan Muslims and Rakhine Buddhists to take up arms against each other, when they were in fact descended from the same root and had lived together in peace for years. A fierce massacre was carried out by the Buddhists, who were incited against the Muslims, which lasted for forty days, and more than one hundred thousand people were killed on March 28, 1942.

The 1942 massacre, which was carried out seventy years ago, was so deeply ingrained in the souls of the people that it planted the seeds of hate among them, and today it has surfaced again.  More horrible events have occurred, leading to Rohingyan Muslims being killed and intimidated and causing further migration.  Rohingyans were to be forcibly removed from Burma (Myanmar) before the 2014 elections, and more than a thousand people have been killed, and nearly a hundred thousand people have become refugees in the latest massacres. As a result of the oppression and the restraint policies which have been in place for many years, hundreds of thousands of Rohingyans are refugees today. Twenty-eight thousand registered and five hundred thousand unregistered refugees live in Bangladesh. There is a government in Bangladesh which is intolerant of the appearance of Islamic symbols and practices in public life, and of Muslims who are engaged in politics and the Rohingyans are oppressed. This is another problem which needs to be resolved.

Rohingya has been turned into an open-air prison where fear is predominant; the Muslims have to pay taxes for births and deaths; permission is needed even for movements from village to village; there is no security of life, property or honour; Muslims cannot be civil servants, they cannot use motor vehicles, fixed or cellular phones and they are not even considered to be ordinary citizens.