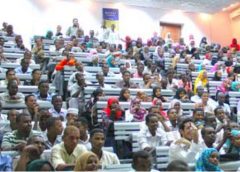 The Sudan Turkish Students Association organized a course under the title of “A Personal Development Course with the perspective of Risale-i Nur” in Khartoum University between June 9, 2012 and July 14, 2012. There was considerable popular interest for the course, which was designed to show participants ways of increasing awareness about their weak and strong points, and thus giving them an increased ability to do good things.

The closure of the course, which lasted for over a month, was crowned with a ceremony on July 14, 2012. Many teaching staff and guests participated in the closing ceremony, Dr Ismat Mahmud, Deputy Dean of Faculty of Arts and Sciences, Khartoum University, and Lady Mulhima, Deanship of Student Affairs, being in the first place.

Both teaching staff and students made speeches about the course. The students who participated to the course stressed in their speeches that the Risale-i Nur persuades the mind and reassures the heart about the truths of the faith, showing the verses of the Qur’an to the eyes of the mind, and treating the spiritual illnesses of the modern age through using allegories and metaphors.

Later, the students put on a play set in Russia and depicting the dialogue between Imam Bediuzzaman and Nicola Nikolayevich, a Russian general, while the Imam was a military captive in the hands of the Russians, which was much appreciated by the guests.

At the end of the closure ceremony, the course participants and instructors were given certificates and presents.

How many universities had students attending the course?

How many people participated to the course?

How many people benefited from the course?

How many people got their certificates?

How long did the preparation for the course take?

How many seminars were covered in the course?

Who sponsored the course? Hayrat Foundation