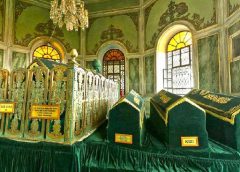 Three friends, a Jew, a Christian and a Muslim, set out on a journey together. When a heavy snowstorm started, they took shelter in a rest-house and waited for the weather to improve.

In the rest-house, a dish of delicious halvah made of honey was served to the three friends. All of them wanted to have the halvah for themselves, so finally they came to the conclusion that whoever saw the best dream that night would get the halvah the next day. They slept and woke up early the next morning and first the Jew started to tell his dream:

“I came across Moses in my dream and I followed him and we climbed together to Mount Sinai. The light on the Sinai was so powerful that I was lost in it.”

Thus, the Jew prolonged his words and told them about things that he had never seen in his dream. When he finished, the Christian began to tell his dream:

The Christian also lengthened his story and spoke about things that he did not actually experience. Then, it was time for the Muslim to tell his dream. The other two listened to him in curiosity:

“My friends, Muhammad Mustafa (PBUH), came to me in my dream and said, ‘one of your friends went to Mount Sinai with Moses and the other went to the fourth storey of heaven with Jesus. Then, you wake up and eat this halvah!’”

His friends looked at the Muslim in amazement and asked, “Did you eat the halvah then?” He said, “I could not resist the order of the Prophet! When you were seeing those dreams, I woke up and ate the halvah.” His friends said, “The real dream was yours” and praised him because of his smartness.

You also must give up the pursuit of superiority, greed and showing-off; real merit lies in service and good behaviour.