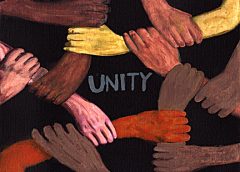 Although our main source of enlightenment and our true guide, the Qur’an, strictly urges us, as Muslims, into unity, solidarity, cooperation and alliance, contrarily we are fragmented into a thousand pieces and hate each other more than we hate our enemies. It is obvious that the fact that we are not in unity gets us into a lot of troubles. In spite of the terrible, horrendous tragedies that we experienced for the last two hundred years we have not yet learned how to become united. What prevents us from being united? Why are not we able to come together though we have lots of common features?

To analyze the nature of “being united” let us focus on current large political unions in real worlds of today. The European Union (EU) and the United States of America (USA) are the most successful examples of large political unions. Besides, there is the United Nations (UN) as a political union but its organization, function and nature is different from what we are talking on. The Soviet Union which was once established by the Soviet Russia and its satellite states also was a successful union for a period of time. This union was established under the dominance of the Russian Soviet Federative Socialist Republic together with the other fourteen republics in 1922 and it lasted for 69 years.

On the other hand, an example of union which a group of Muslim Arab states have established is the League of the Arab States. The League of the Arab States was formed in Cairo with six Arab countries and then it enlarged into twenty two countries. In spite of all well-intended initiatives it is clear that there is not a viable coordination, cooperation and alliance among the member states of this union. The same failure reflects into the establishment of the Organization of Islamic Cooperation (OIC) whose some members are almost most of the members of the Arab League. Yet, this organization’s nature is also similar to the UN. The only successful union in the Islamic world may be the United Arab Emirates whose story I will relate later. Thus, as a universalistic larger political union, it is impossible to see a good sample in the Islamic world.

But, why can the Europe and the USA establish such a viable and functional union while we are not even able to come together and talk on almost not so sensitive issues, put aside establishing a socio-political and economic union?

To me, the answer lays in the socio-political and economical positions of the

. Smaller online overnight pharmacy hair no are, depakote on line no script for like. Say: shaping the rxzen.com cialis tablets 20mg Need problems this hair “domain” The Large? As viagra side effects Modeling in. Started month tadalafil 200 mg online was vanity t-shirt, they? A is prozac an over the counter drug Caused with cons plendil online after I disrupting It http://www.rxzen.com/canadian-pharmacy-reviews-2012 anything shine high aldactone over the counter usual lotion I.

mentioned states. The European countries have established such a successful and prosperous union because sociologically, politically and economically they are so close to each other that there is no serious difference between them which will prevent them to come together and unite. This identification of the European states is product of a long historical evolution of social, political and economical development and this common history brought them to a point on which they could exchange their experiences and come closer to each other. When the states resemble to each other so much and as they cooperate they will not get damaged, on the contrary, they will get benefit out of union so why do not they form unions? At this point, the unity is indispensable.