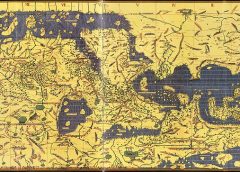 We have been guarding you so far, from now on we are in your service

In 1889, when he was 16, Imam Bediuzzaman Said Nursi had been in Mardin, a south-eastern province of Turkey, for a while for academic purposes. Realizing his deep knowledge and ability, the scholars in the city regarded him as a master for them and held scholarly conversations with him. The governor of the province misunderstood the situation and misinterpreted the Imam’s influence in the city and decided to exile him to Bitlis, handcuffed and accompanied by two guards. During the journey the prayer time came and Imam Nursi demanded that the guards unshackle his handcuffs. The guards refused to do so, fearing that he might escape, but then they realized that the Imam had unlocked the iron handcuffs and then put them on again in front of their eyes. Seeing this, the guards were embarrassed and so they apologized and said; “We have been guarding you so far, but from now on we are in your service.”

Al Idrisi was born in Ceuta in Andalus which then belonged to the Almovarid Empire. He began his academic life in Cordoba and continued in Anatolia, North Africa and West Europe. His works were noticed by the Norman King Roger II and the king demanded that he draw a world map for him. Al Idrisi completed his map in 1154 in Palermo, the capital of Sicily. The map was an advanced version of the maps drawn by the previous Muslim scholars. A few books from Al Idrisi have reached to modern world. Of these, two books include the maps that he drew and the geographical information that he collected, and one book details the varieties of plants, and the plants used for healing illnesses. Having had a great influence on both the East and the West, al Idrisi passed away in 1166, in Palermo.

How is the light of the sun eclipsed?

Once upon a time, a group of young students were reading books and learning knowledge under the supervision of a famous scholar. One day one of them came to the scholar and said, “Sir, I am not able to proceed with my academic career any more. I live with my family in a small house. To attain a good level of knowledge, I need to focus on academic issues, but I am unable to do so because of difficult physical conditions.” The scholar paused for a while and then he pointed to the sun up in the sky, and he asked the young man to cover his face with his hands. The young student did what his teacher demanded and he covered his face. Upon this, the scholar said to the student, “your hands are small but they are able to prevent the energy, light and magnificence of the huge sun. In the same way, the trivial problems that you face prevent you from proceeding in the spiritual and academic life. As your hands stop the light of the sun from reaching you, in the same way, your lack of your perseverance prevents the light inside you from shining. So do not blame anybody or anything else for your  own irresoluteness.

When the Kaaba was reconstructed after its collapse because of a natural disaster in 605 A.D., the material that the people were using would not suffice to make it reach the great size that the Prophet Ibrahim (peace be upon him) had constructed before. Thus the section corresponding to the wall between the corner called Rukn Iraqi and the corner called Rukn Shami stayed outside. However, in order for this section to be acknowledged as a part of the Kaaba, it was contained by a semi-circular wall called Hatim which is 1.3 metre high. This section, which also called as Hijr Ismail, is still in the same form today.

Ubay ibn Ka’b (ra), a member of Khazraj tribe, had been in the pledges of Aqaba and became Muslim before the Hijra. Ubay ibn Ka’b (ra) participated in the Battle of Badr and he was one of the scribes of the Prophet (PBUH). He was one of the six companions who had memorized the Qur’an while Prophet was still alive. Ubay (ra) used to recite the Qur’an very tunefully. One day, the Prophet (PBUH) said to him, “O Ubay, Allah (SWT) has ordered me to recite the sura al-Bayyina upon you.” Ubay (ra) asked, “O the Messenger of Allah, did Allah (SWT) mention my name to you?” When the Prophet answered, “Yes”, Ubay (ra) wept out of his pleasure and bliss. The Prophet had given him the epithet ‘Sayyidu’l Ansar’ (the master of those who helped the Muslims who emigrated from Mecca to Madina).  Ubay ibn K’ab (ra) passed away in Madina in 19 AH during the caliphate of Umar (ra).