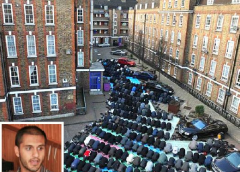 We conducted an interview with Salahuddin Ahmad Mazhary who participated in a forum in Istanbul from the UK. He lives in London. He is a student of History at the School of Oriental and African Studies (SOAS) in London. We talked with him about the problems that Muslims, particularly young Muslims, are experiencing in the UK.

TP: What kind of difficulties do you have in UK as young Muslims?

Mazhary: First of all, at the heart of all the problems of the young Muslims in the UK is fundamentally and existentially an identity crisis. The first question is whether we believe that we can be Muslim and British at the same time. Does being British mean contradicting Islamic values? Does integrating into society mean assimilation? For example, among them are adopting the drinking culture, and adopting and subscribing to British social norms which contradict basic Islamic values and etc. Or are we just solely Muslims who need to feel ourselves attached only to the ummah and who were just born in Britain? Do we have to forget that we are part of British society? So the fundamental issue is whether we could be British and Muslim at the same time. I think this is a pertinent issue and this has raised lots of the questions and caused a lot of controversy. It is a polemical question within our community. As a community we have not come to a consensus and agreement on this issue. Also, our identity crisis is exacerbated by intra-Islamic issues, by debates within Islam. Young Muslims are confused by the claims of the different types of Islamic groups.

TP: What is the impression of the non-Muslim British people about Muslims?

Mazhary: Some British people think that we are failing to integrate into society and make positive contributions to society. Therefore they think if Muslims do not adopt British values, they are not British, they are something else. They are destroying foundations of British society. We look like we live in a parallel society. There is fear in some people that one day the Muslims will outnumber the non-Muslims and we will apply Sharia rules. They believe that British culture is being attacked on many sides.

TP: Is there no common ground on which Muslims come together and establish organizations and do activities?

Mazhary: Muslims are recognizing the roots of their disunity and lack of coordination, for example to do dawah. All brands of Muslims are tarred with the same brush and are being attacked ideologically and culturally through every means. It does not matter who we are, what identity we profess, the fact on the ground it that as Muslims we are being attacked. Even though as Muslims we are different groups and have different concepts within Islam we have lots of common values. We agree on many fundamental things. We can agree on the fact that we share the same Holy Book and same Prophet. Also, we share the same situation regarding our youth. Our youth are being affected by the Western culture. Our youth are forgetting their Islamic identity. So, those are all common problems that we share together and, alhamdulillah, we are working together to combat some of these problems.

TP: After 9/11 in New York and 7/7 in London, how did things develop regarding terrorism and Islamophobia?

Mazhary: Well, there has been a tremendous change in the media and news programs and the language and tone that are used. For example, right after 9/11, George Bush’s speech expressed the position which many Western governments took. They expressed that it was not Islam that was culpable for the attacks, and it was a minority of people who had twisted ideas. However, now increasingly the media is attacking Islam itself. They

say Islam as a religion, as a belief system, is intolerant. It’s homophobic. It oppresses women and diminishes their rights. They also say Islam is intolerant to the other belief systems, and that Islam believes in its own superiority and believes that one day it will be a prevalent social, economic and religious system in the world. Their tone of language has changed remarkably within the last ten years. This is reflected, for example, in an increasing trend of banning niqab and hijab in Europe. That way the other principles of Islam are being debated; the free-mixing and halal and haram. In many cases these issues are becoming very controversial. Also, I would like to give a current example of how the situation has become worse; David Cameron expressed in his speech in Munich that British multiculturalism has failed, because, he said, it is being too accommodating towards other belief systems. This shows us that the impact and ideas of right wing parties have started to creep in and make headway in the government’s main domestic issues and are starting to gain prominence. This is a very worrying trend for British Muslims and this shows that Islamophobia is becoming more acceptable and fashionable to express.

TP: You live in a non-Muslim country as a minority group member and you are experiencing some difficulties. What is your message?

Mazhary: I will express my opinion clearly, and I know this opinion is a controversial issue among some British Muslims. I think there is nothing wrong with being British and Muslim at the same time, because in many cultures when Islam came, it adopted some of the culture and Islamized it. Now in many Muslim countries, you can see that to express yourself as Egyptian in many cases means to express yourself as Muslim. Like Turkish culture, to express yourself as Turkish is inherently to express yourself as Muslim. Similarly, we can apply this philosophy to the UK situation. One day, to express you as British may mean to express yourself as Muslim. Even to this day, there are things in Egyptian or Turkish culture which are not Islamic, but it does not diminish one’s feeling of being Turkish or Egyptian. For example, in Egyptian and Turkish culture things like belly-dancing and honour killing exist. But, if somebody does not commit and perpetrate these “Turkish or Egyptian cultural values”, that does not make him less Turkish or Muslim. Similarly, if I am a Muslim born in Britain and I speak like British people and I choose not to drink alcohol and not to wear tight clothes, that does not make me any less British. I believe we could create our own British Islamic identity. There is nothing wrong with this. But being British does not mean agreeing with British foreign policy. It does not mean subscribing to everything that the government says. Even many people among British people fundamentally disagree with the tenets of British foreign policy, such as attacks and the illegal wars in Iraq. Another thing I would like to say is that we should not try to cheat other people, thinking that we live in Dar’ul Kufr. We see that the Prophet (PBUH) was trustworthy even towards his most violent enemies. I would like to finish with a quote, “it does not mean that because we are treated in a bad way, that we will treat others in a bad way.”

TP: Thank you very much.