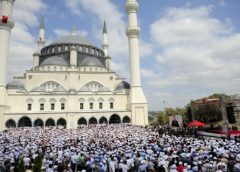 Opened to worship on Friday, June 20th 2012, Mimar Sinan Mosque was built in 22 months at a cost of 40 million TL. The mosque, which is similar to Edirne Selimiye Mosque in terms of external view, was constructed on 6 columns. It has a dome which is 42 meters high, and 4 minarets that are 72 meters high, each having 3 sharafas (balconies). The Mosque has a capacity of 10 thousand people. Chandeliers stand out with their special designs of calligraphy. The word كُن فَيَكُونُ, meaning “(He says) ‘Be’ and it is”, from the Qur’an was written on the main chandelier. And the Divine Names of Allah (swt) ‘سبحان’, ‘برهان’, ‘دیان’, ‘منان’ and ‘حنان’ were written on the other 6 chandeliers; and they were connected to each other with the Divine Name ‘كریم’.