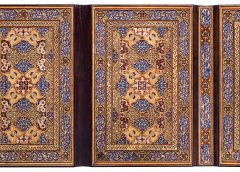 Bookbinding dates back to very old times. Before the invention of paper, the texts written on parchment and papyrus were kept as roll in wooden cases or boxes. In order to keep the texts safe, which were written on wax tablets and papyrus, wooden lids were used and a kind of binding was performed by fastening these lids from both sides with strings. Then, after the parchment was started to be used, the parchment was folded and made into forms, and then stitched and bound.

With the invention of paper in Central Asia, bookbinding developed among the Turks and became a branch of art. The first bindings of the Turks are seen with the Uyghur Turks in East Turkistan in the 7th century AD. The development of bookbinding in China started with the settlement of Uyghur artists in China. The Uyghur Turks played a major role in the improvement of the art of bookbinding by coming to Iran and Samarra (Iraq) at the time of the Caliphate of Mu’tasim Billah. The first paper factory in Andalusia was established in Shatiba [Jativa] from 1144 to 1154. Europeans learned producing paper from that location. In the East, the first paper factory was established in Samarkand in 652 AD. Bookbinding came to Arabian Peninsula and Iraq after East Turkistan and Khorasan.

Bookbinding, which is a unique art to Central Asia, made a great progress after the Turks embraced Islam. The spread of Islam to three continents, reproduction of the copies of the Qur’an, the preservation of the works about religion and science and the importance Islam gives to knowledge caused the protection of the works that are the sources of knowledge. Muslim Turks show respect to writing and books to a great degree. As a matter of their faith, modesty and manner, they show great respect to religious books. Especially the respect and sensibility towards the Holy Book of Islam, the Qur’an, led to paying special attention to its gilding and binding in a most beautiful manner. As a result, bookbinding has become a branch of fine arts.

The art of bookbinding which developed at the hands of the Turks affected the European art of bookbinding to a great extent. Due to this, paper marbling and motifs of Islamic gilding started to be seen in Western Europe. After the 17th century, the classic style of binding gave its place to new styles. With the stylizing of flower pictures, the style of shukufa (flower) developed. The shukufa period is considered as the end of the classic style. Then, especially among Iranians, shukufa gave its place to portrayals of humans and animals. By varnishing these portrayals, the style of Lâke was born. Towards the end of the 18th century, Barok and Rokoko styles were seen as the first effects of Western binding on the Turkish bookbinding art. Finally modern binding took the place of the old one.

The features of the classic bindings are as follows:

The main materials used in bookbinding are leather and cardboard. In the classic style the leather is moistened with water and softened and it is used after it is cut as thin as paper. The binding done with goat leather is called “Sahtiyan Cilt;” the one done with sheep leather is called “Meşin Cilt.” The most commonly used leather colours are black, light beige, brown and maroon.

A classic binding is composed of four parts. These are upper (right) cover, back (left) cover, or sertab and miklep. The upper cover is in front of the book and is bound to the back cover with the bookback. The sertabis between the miklep and the back cover. The sertab is the part that covers the side of the papers when the book is closed and it moves with the back cover. The miklep is the part that is put between the pages and it is bound to the sertab. The margin left between the cover of the binding and the length of the book – which is very little and is done for preventing damage to the page edges – is called “dudak” (lips).

The forms are mostly bound with tram silk with a suitable colour for the colour of the paper. Then the headband is knitted by hand. The headband ensures the forms do not disperse and stay smooth. Then the leather cover, which is prepared according to the size of the book, is bound. A classic binding like this has the following features: the cover has the length of the book; the headband is knitted by hand; the bookback is smooth and has no writing on it. Ground gold is prepared in the classic style and is polished. Gilding is done on both covers and on the sertab and mikleb. With these features we can see how the classic binding differs from the modern binding.