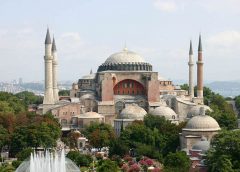 Between the years 532 – 537, The Byzantium Emperor Justinianus wanted a more sumptuous building to be constructed on the other two Hagia Sophias which were already built and brought two of the most famous architects of their time, Isidoros of Anatolia and Anthemios to Istanbul whom built the last Hagia Sophia which is standing this day. The architects started on their work right away and as the first order of business the palaces and houses were demolished which were in the designated construction area. Then the best materials and columns from old temples, chapels and houses were brought to Istanbul; also the most famous marble quarries of the world were employed for the construction of Hagia Sophia.

After 5 years of construction, in 27th of December 537 the building was opened with a big inauguration. Justinianus on his personal carriage being pulled by 14 horses stopped in front of the big gate called “The King’s Gate” and after viewing Hagia Sophia with pride he entered the building excitedly and said those historical words addressing the Prophet Suleiman (as): “O Solomon! I have outdone you!” Because until then it was accepted as the biggest sanctuary was built by the Prophet Suleiman (as).

After being used as a church for 916 years, with the conquest of Istanbul Hagia Sophia was converted to a mosque and served Islam for 481 years after 1453 and then it was turned into a museum in 1935 and closed to worship.

If studied as architecture, it consists a big mid area section, two side areas, and abscissa and inside – outside narthexes. Inside area is 100×70 meters with 4 big columns called “elephant feet” carrying a 31 meter diameter dome covering the inside at a height of 55 meters. There are a total of 107 columns at the first floor and galleries.

The most characteristic features of the building are the 6th century Byzantium ornaments samples on the column caps. The oldest mosaics are the ones located at the inside narthex and side naves featuring gilded geometric and plant motifs and themes. The other mosaic figures seen on the Emperor’s Gate, at the abscissa, on the exit gate and the upper floor galeries belong to the 9th and 12th centuries. Deep carved marbles belonging to Middle Ages present a beautiful light – shade game.

Despite the unique superiorities the building had, there were vital technical errors. When it was built the first time, the building was covered with a much lower sail vault compared to the dome height today. Also it didn’t have the struts to support 31 meter diameter dome and because it was built in a hurry, cracks on the side walls appeared from the sheer pressure from the dome, resulting the dome to collapse after an earthquake. After the repairs and renovations the dome is not a round circle but in an elliptic form today.

Evliya Çelebi, in his “Seyahatname” [Travel Book] mentioning an earthquake Hagia Sophia had in 571 writes these about the repairs of the dome:

“The earthquake that occurred at the night the Prophet (PBUH) was born; the Palace of Kisr, The Red Apple and the Dome of Hagia Sophia were collapsed. After some time, Khidr (a.s.) suggested the three hundred priests living in Bosra under the leadership of Priest Bahira to go to Mecca. They took an amount of saliva from our Prophet’s (pbuh) mouth and his handprint, who was at a young age then. In short, the priests taking saliva from the Prophet’s (pbuh) mouth and water of zamzam and some soil of Mecca returned to Istanbul and repaired the collapsed parts of Hagia Sophia with these.”

When Sultan Mehmed the Conqueror entered Istanbul for the first time, he came in front of Hagia Sophia and unlike Justinianus, he got off his horse and visited the building with respect and reverence. Also it is worth mentioning that to start with he had Hagia Sophia repaired as it was in ruins. “Roman Emperor Julius Caesar’s attack on Egypt and burning down the magnificent Alexandria Library” or “In 1204 Latinos entering Istanbul and destroying it which was unprecedented throughout history” is recorded in history and called “vandalism” of cultures. The Ottomans on the contrary were “Protectors of Culture” and artworks and masterpieces were preserved. Inside Hagia Sophia, a special kind of plaster was used on the walls containing figures that prevent worship. This plaster protected the figures without damaging them to this day. Even hundreds of crucifixes inside the building were protected and did not perish, and they witness the protection provided by our ancestors. The retaining walls added by Architect Sinan in 16th century, repairs done by Architect Fosatti brothers, restorations done after 1930 and the addition of an iron belt around the dome are important repairs.

The surroundings of Altar show the best examples of Turkish tile arts and Turkish calligraphy arts. By the famous penman Kazasker Mustafa Izzet Efendi, a surah taken from Qur’an and written over big and round leather plates of 7.5 meter diameters hanging over the dome are some of the most important ones. On these plates, the names of Allah (swt) and our Prophet Muhammed’s (pbuh), the names of the four great caliphs (ra), Hasan (ra) and Huseyin (ra)’s names are written.

Some examples of builds added to Hagia Sophia in Ottoman period would be the tombs of Sultan Selim III, Sultan Mehmed III, Sultan Murat III and some sultan sons along with The Fountain of Sultan Mahmud I and primary school, imaret, library and the Sultan Abdulmecid’s private worshipping area inside Hagia Sophia (elevated from the ground via columns and called mahfel) and the time calculators’ building for accurate praying time calculation.

Hagia Sophia has been an inspiration to Ottoman mosques as well. The dome structure shows similarities in some mosques, especially Suleymaniye Mosque. There were even some specialists saying “There is an influence of Hagia Sophia on all Ottoman mosques”. In the words of some historians “Sinan the Architect was the one who understood Hagia Sophia the most.” He tried building a mosque in Istanbul – Tophane, known as Kılıç Ali Pasha Mosque with a similar plan after examining and admiring Hagia Sophia for a long time.