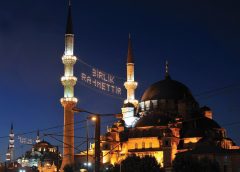 Mahya is an exciting Ramadan tradition enhancing the atmosphere of the blessed month.

Mahya is accepted as the herald of Ramadan in our old culture. As good news of Ramadan, it smiled to Muslims with its sparkling face. The tradition of mahya still continues although there are not many masters of it nowadays. In the era of Ottomans, a special importance was attributed to it and never neglected. The aims of this tradition with written messages are to direct people at kindness, to promote good deeds and to encourage children to like the month of Ramadan as well as to thank Allah Subhanahu wa Taʿala. People awaited impatiently about what would be written that night by the mahya makers who were competing with each other to set up different mahyas every night and were hiding their design from each other. Once the first oil lamps were hanged to the ropes, predictions started to be made.

Mahya is a luminous writing which is strung, especially in Ramadan, between minarets of the mosques which have at least two minarets. Mahyas, made from oil-lamps in the era of Ottomans, are made from electric bulbs nowadays. The luminous writing strings stretched between the minarets of mosques are called mahya, and the craftsmen who prepare these writings are called mahya-makers. In old times, mahya-making process was a real branch of an art which needs major expertise. Grand masters who were specialized in this area would teach all technicalities of this job to the apprentices who would take their place. Wires or ropes were stretched between two minarets of the big mosques, mahya-master wrote writings, even drew pictures, by aligning the oil lamps, which were usually filled with olive oil, or lantern candles on the ropes or wires. All along the Ramadan, these oil lamps burned at nights despite the wind. After the mosques started to be illuminated with electricity, mahya-making became easier, and it is no longer an art. Tradition of mahya-making is still carried on with the new script and colourful electric bulbs instead of oil lamps.

While firing oil lamps in minarets is common in the Islamic world, mahya-making stays a peculiar art to Istanbul. The reason of this is that ‘Selâtin (Sultan) Mosques’, which were built by the sultans and have two, four or six minarets, are in this city; and because there should be at least two minarets for a mahya to be strung.

Mahya-making, which developed as a peculiar art to Turks in the Islamic world, especially to the residents of Istanbul, is a four hundred-year-old tradition. The old Ramadans of Istanbul were in a splendid atmosphere in which people were socializing by music, literature, banquet, entertainment and performance arts; and the culture of the state were revealing itself with its all fineness.  The symbol broadened that exciting condition from hearts to sky were the mahyas. Colouring the nights with mahyas and oil lamps was natural for a city where there were lots of beautiful activities for daily life such as ‘şehrayin,’ ‘donanma nights’ and ‘moonlight walks.’

According to a rumour, in 1614, the Calligrapher Hafiz Ahmet Kefevî, one of the muezzins of Fatih Mosque, drew an artistic picture with writings between two minarets and gave it to Sultan Ahmet I as a gift. He liked it and with the inspiration from this gift he ordered to make mahyas between minarets (as in the picture) at the nights of Ramadan under the condition of consistency with the religious rules. This novelty was first applied to the newly finished Blue Mosque in 1617 and became a Ramadan tradition in the following years.

In the Ramadan of 1723, it was ordered that mahyas would be made in all ‘Selâtin Mosques’. Moreover, it was ordered to build two new minarets for Eyub Sultan Mosque which had shorter minarets. Until the 18th century, there is no entry in the waqf record books about making mahya to ornament minarets. For the first time, in the waqf of the library built in Topkapi Palace by Sultan Ahmed III,  there can be seen a record of order which is about providing nine thousand silver coin for the mahyas of the Hagia Sophia Mosque in 1724.

Here are the most used mahya writings in Ottoman era:

Ya Ghanee, Ya Maʿbud, Ya Kafi, Ya Shafi, Ya Karim;

In addition, the last verses of surah al-Fath were also written.

“Oruc tut, sıhhat bul” (Fast and you will be healthy),

“On bir ayın Sultanı” (The Sultan of the eleven months),

“Şefaat ya Rasulullah” (Intercession [Shafa’ah] oh the Messenger of Allah),

“La ilahe Illallah” (There is no god but Allah),

“Elveda ya sehr-i Ramazan” (Farewell oh the month of Ramadan);

and every year on May 29th, the anniversary of the conquest of Constantinople (Istanbul), the mahya of “Yüce Fatih ruhun şad olsun” (Oh noble Fatih, may Allah bless your soul) is set up.