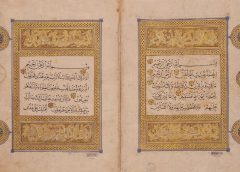 The writing of the Qur’an took its finest form in the 19th and 20th centuries with “Ayat Barkanar” and “Tawafuq” styles.

As it’s known, during Abu Bakr Siddiq (ra)’s khilafah era, a committee of the companions under the chairmanship of Zayd ibn Thabit collected all the written verses in one book with a subtle meticulousness. That main copy was kept with khalifah. During Khalifah Uthman (ra) era Islamic geography expanded. According to one account, six copies from the main copy were reproduced and sent to important cities at that time.

We see that in those copies their focus was the correctness of verses as much as possible rather than the aesthetic side of the writing. In fact, at that time Arabic Language was quite new at spelling. It’s known that aesthetic work in Islamic writing began in Abbasidian era. The writing took its perfect form by the hand of Khattat ibn Mukla and after him Ibn Bawwab and in 13th century Yaqut al-Mustasimi.

Especially by the hand of Khattat Yaqut al-Mustasimi, in era of Abbasid a different design of Qur’anic writing appeared and different types of Islamic writing were used in the same pages of Qur’an copies. The copies written with Muhaqqaq, Rayhani and Naseeh style in the same page show the attribute of that period.

Especially in Safavid period Qur’anic copies were embellished in very beautiful ways. In this period they unusually concentrated in writing the Qur’an copies. The examples of the Qur’an copies written in Zarandud style from beginning to end in that period are not few. In some Zarandud copies of the Qur’an, we see letters that were circled with black ornamental lines.

Ottoman era is an important era of writing the Qur’an copies. Just as Islamic writing entered a new period in Ottoman times, so does writing Qur’anic copies. In Sultan Bayezid II’s time, Hattat Shaikh Hamdallah acquired a new style to Aqlam-i Sitta (Six type of Qur’anic writing) with the support of the sultan. In this era Sulus and Naseeh writing adopted a sweet style. Instead of Muhaqqaq and Rayhani writing, Naseeh writing was started to be used and the usage of different writing styles in a page was left.

In Ottoman writing art, the second period after Hattat Hamdullah is the period of Hafiz Uthman Efendi. Hafiz Uthman Efendi’s writing appeared as complementary to Hattat Shaykh Hamdullah’s.  But the Qur’an copies he wrote became famous in 20th century rather than in his age.

We see that in Ottoman era, especially in 19th century there is a parallel between development in calligraphy art and writing Qur’an copies. Especially writing “Ayat Barkanar” copies (of which every page starts and ends with a complete verse; no page overflow, that is), which made it easy for huffaz to memorise Qur’an, began in this age. Writing of “Ayat Barkanar” copies which began with Kayishzade Hafiz Uthman Efendi was developed afterwards. In this period of time Qur’anic copies which were written by Kazasker Mustafa Izzet, Mehmet Shefik Bey, Mehmet Shevki Efendi and Galatali Mehmet Naili are good examples for writing of Qur’an copies.

Again in this century Imam Bediuzzaman Said Nursi ordered his students to write copies based on “Ayat Barkanar” to discover a special feature named “Tawafuq” which is more interesting than writing arts, and it is the most important service (of writing Qur’an copies) in this century. The Qur’an in Tawafuq is the easiest to read, but most importantly as a great feature, all of “Allah” words come face to face or sub-bottom or back to back in whole Qur’an. “Tawafuq” has given an important consideration that Qur’an is a miracle in so many aspects. Blessing of writing “the Qur’an in tawafuq” copy was bestowed on Ahmed Husrev Altınbaşak.

One thought on “Qur’an Copies from Revelation to Ottoman Era”