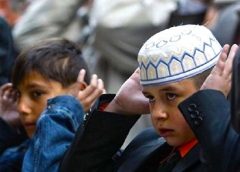 During the previous century, at the beginning of 90s, Bosnia and Herzegovina like several other countries of the Balkans came into a period of political and economic transition. Unfortunately unlike many of them BiH was attacked and under aggression which lasted from 1992 to 1995 during which the country was totally devastated. Harsh economic situation during war, and post-war transition period forced the inhabitants of BiH, to become preoccupied with finding the ways for survival. Furthermore, re-traditionalisation combined with ethnic and nationalistic divisions influenced family Dynamics and gender roles in the family.

Also fast opening up of post-war Bosnia and Herzegovina toward foreign investments, capitalism and market economy made the position of citizens even harder. In terms of religion and concretely Islam, it is possible to say that religion as such although socially undesirable, was present among the people also during Socialism but in a less intensified form.

Fuller and more intensive affirmation of religion happened during the aggression on Bosnia and Herzegovina.

The experience of war and survival of war atrocities brought people back to religion. Along with this, the need for national and ethnic belonging, together with transition and bad economic situation made people turn to religion. Most probably for some people turning to religion represented a way to deal with consumerism, globalisation and market economy as well (Seta 97).

Bosnia and Herzegovina today is a democratic, secular state with no state religion. It is on its path of becoming a full member of Euro-Atlantic integration and the European Union. BiH has two entities (larger administrative units which are the result of Dayton Peace Accord that stopped the war) namely the Federation of Bosnia and Herzegovina (where most of the Bosniaks and Croats live) and Republika Srpska (where most of the Serbs live). Constitution of Bosnia and Herzegovina today includes provisions guaranteeing human rights and basic freedoms, human integrity, dignity and the principles of non-discrimination. Its Article 2.4 prohibits discrimination on any grounds like gender, race, colour, language, religion, political and other opinion, national or social background, national minority, property, birth or other status. All other laws are also aligned with these ideas and in theory the legal framework is excellent.

Nevertheless in practice there are many inequalities and problems that people are facing from labour discrimination to deprivation of maternity leave.

Estimates of BiH’s current population range from 3.8 up to 4.6 million people. [1] The CIA World Factbook estimates that in 2008 BiH had a population of 4.6 million people of which 48% are said to be Bosniak (of Bosnian Muslimorigin), 37.1% Serbs (of Orthodox Christian origin), 14.3% Croats (of Catholic origin) and 0.6% Others.

Bosnian Muslims are Sunnis following the Hanafi school of thought. During and after the 1992-95 Bosnian war, the first Salafis, locally known as “Wahabis” emerged. Their exact number is not known but is estimated to be a few thousands.

Contrary to general belief, they control no mosques. There are few Shi’a Muslims and no Shi’a mosques, although there are pro-Shi’a associations. For many secular Bosniaks, their Muslim identity has much more to do with cultural roots than with religious beliefs. There are no reliable data on active religious practice (Smajic and Kovac 51).

mosques, prayers, education, publishing, charity… There are also many Muslim faith based civil society organisations that in different ways and with different success try to cater for the needs of Muslims and others in BiH.

Although it is greatly sharing the problems with other Balkan families and most probably families globally, this part of the paper will briefly deal with the case of the family in BiH, and more specifically the Muslim family. The family structure in the Sarajevo region, the capital of BiH, with Bosniaks (Bosnian Muslims) as a majority ethnic group, on the sample of 442 families results in 88,5% of families belonging to a nuclear family type and 11,5% of extended families. In terms of structure the most frequent families are four-member families (52%), then five-member families with 20,4%, three-member families with 19,9% and six-member families with 6,3% (Ziga).

In all societies, especially patriarchal ones [2], like in Bosnia and Herzegovina, the role of the family is of utmost significance and, professor Jusuf Ziga states “deconstruction” of the patriarchal family type has been intensively

present since 1960s when we see “a new, second, revolutionary trend of changes that are focused on the individual”, and this has been additionally intensified during the beginning of the 21st century due to current, globally preferred liberalism and individualism that is stimulating “great variety of family types” recognized according to Ziga by the following:

● delay of the marital age,

● increased number of children born out of wedlock, In brief, in Bosnia and Herzegovina (and the Balkans as whole) we are witnessing an increased gradual trend of abandonment of probapatriarchal family structure without basic preconditions developed for establishment of a nuclear family like the one present in Scandinavian and other developed countries, which is having quite bad effect on socialisation of children.

Some of the underlying characteristics of the BiH society are influencing the family directly as well like ethnic tensions, extremely high corruption, high unemployment rate (see the table 1) and underdeveloped economy. Most Bosniaks live in the Federation of BiH which is also characterised by negative trends in all important segments of the social dynamics: increased age ing of population, increased mortality rate, decreased birth and fertility rates, negative age and space population distribution and the young people leaving the country.

The family in FBiH is extremely and worryingly endangered and this is visible through not only the economic crisis and the decrease in the number of household members, but in increase of violence in the family and the society, as well as increased socio-pathologic phenomena (juvenile delinquency, substances, alcohol, corruption, etc. including the destruction of the basic scale of social values and morality as such), growing in the family. Along with this, the war atrocities brought the family to a crisis as well since it is estimated that every other person in Bosnia and Herzegovina has been moved from its pre-war home – internally and also abroad, and that there is a disproportionate number of war widows with children. Also, the influence of the PTSP to the war veterans and general population in BiH has not yet been researched well but it is being assumed that some of the causes of disfunctionality of the families are also PTSP related. In relation to this it is possible to mention that the need for modern and qualitative methods that can be applied in the field of mental health has been present in Bosnia and Herzegovina since the end of the war (1996). Consequences of war, war suffering, loss of close family members, survival in constant fear for own life and lives of family members, severe conditions of life without food, water, electricity and other necessary things for a decent human life, left evident marks on the health of citizens of Bosnia and Herzegovina but also to the system of health insurance.

Consequences of the war and social transition process have created a new category of vulnerable people – those with damaged mental health. Female population in Bosnia and Herzegovina has been especially affected by changes in our region during last 15 years. One of the key problems in BiH is high unemployment rate (31.1%) that is directly affecting the quality of life of the family and children.

According to the research performed for the needs of UNDP NHDR, more than half (52%) of children in BiH are socially excluded, live in unfavourable family climate, i.e. one-parent families or extremely big family (66% according to Preliminary report). Being a child in BiH today is very hard and children are under a threat of being excluded.

According to this research out of 1521 respondents, 675 (44%) of them say that their households are living under “hard” or “extremely hard” conditions caused by low income, whereas 612 (41%) are managing somehow to put the end together for one month, and only 192 (12.5%) of them stated that they are living a comfortable life out of their current income. In other words, almost half of the inhabitants with children live in “hard” or “extremely hard” conditions exactly because of poverty and there is a huge risk that their children will be deprived of their needs and that most probably these children will then transfer the poverty to their future families and households exactly due to their own low educational standard and social exclusion.

The graph 2 shows how poverty, economic pressure and other mentioned factors can influence the family and its functionality as well as bad care of children and their developmental needs.

All these mentioned problems are also present in the Muslim community, but the Muslims of BiH also have some specific problems that are related only to them. One of them is different understanding of Islam by spouses and different understanding of the positions of women and men in the society and family which also includes the situations in which some men try to justify domestic violence through misuse of Islam (i.e. psychological or physical). Also the challenges of balancing life and work are resulting in higher divorce rates among Muslims which still (as well as others in BiH) are unaccustomed to use counselling services. An additional hurdle for Muslims socially undesirable position of religion in BiH and the attitude of the society toward practicing Muslims that is often challenging the right for women to wear the headscarf or Islamic religious education in public schools or any other visible religious practice.

On the other hand, a problem is also created by some Muslims themselves and their attitude towards society, because they either do not know how or do not want to be flexible and accommodate the needs of others. This is in a way a collision of “old” and “new” identities and requires a great internal, personal negotiating. Therefore such a climate is not very favourable for raising Muslim children who need stimulation and support in terms of the building of their Muslim, Bosniak and Bosnian identity.

A special problem for the Muslim family is also the fact that women in Bosnia and Herzegovina faced additional disadvantage of forced family disintegration that arose from a war which left many without the traditionally male breadwinner. [3]

Due to the death toll, ethnic cleansing, genocide and damaged family-based social networks, there are large proportions of female headed household in some areas, such as Srebrenica, where approximately

42% of all returnees live in female headed households.

1. There are no exact data available since the last official census was held in 1991.

3. Approximatelly 100 000 men were killed during the war in Bosnia and Herzegovina.

One thought on “Muslims in Bosnia-Herzegovina”