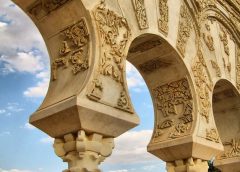 In his dream on his way to Spain, the great commander Tariq ibn Ziyad sees the Prophet (peace and blessings upon him) and a group of companions of the Prophet from Ansar and Muhajereen all girded on, and the Prophet encourages him “Oh Tariq, continue your march!” His intention of conquering Spain unites with the courage and perseverance and he contributes to the opening of the doors of a great civilization with his conquers (711) which will change the color and history of not only the Muslims but also the whole world.

The year 2011 is the 1300th anniversary of this important conquest. So it is just the right time to discuss, evaluate on Andalusia in every aspect and take lessons from it. For instance, Dr. Lutfi Seyban, one of the few specialists in this field, attracts our attention to our negligence and indifference regarding Andalusia: “When it comes to Andalusia, we, Turks are still at the level of lamenting “Oh Andalusia, oh beloved Andalusia!” But the west, even Arabs and Maghrebian have conducted concrete scientific, social and cultural studies in this field. Although this is what we should do, we cannot go beyond emotional reactions. And the people still making Andalusia heroism with this emotional discourse and Great Mosque of Cordoba tours gain popularity and some even abuse this treasure of history for economic interests!” (endulus.net) Mr. Seyban says, “It is high time that we give up our old habits and approach history not only from an emotional but also realistic and scientific point of view” he also complains that people does not support beneficial studies on the field regarding Andalusia, “It is a pity that nobody support the least the people carrying out concrete scientific, social, cultural study projects on culture and civilization of Andalusia and seeking support going from door to door.” Lutfi Seylan who make serious studies and does not limit Andalusia only to academic studies explains what should be done: “Instead of visiting Andalusia each year to satisfy our emotions, we should seek opportunities to develop good human relations with the Muslims and thousands of Spanish Andalusians who just wait a little of our interest to embrace Islam.” The following observation by Roger Garaudy “the west lost its purpose because it lost the wisdom, and Andalusia has been the example of the balanced and ideal civilization.” Ali Al-Carim says, “The important thing is not to cry for Andalusia or praise it, it is to understand it. What is necessary is not the tear but eye-straining work. The Western mind managed to extract the materials from Andalusia to lay the foundation of a new civilization by understanding it. What about us? A fish does not know it is in water.” Historian Mustafa Armağan quotes from famous literary critic Harold Bloom, “Our current multiculturalism, is a parody of the culture of Cordoba and Granada.” Armağan points sadly to our weak bond with Andalusia, “The wind of Andalusia blew even in the streets of New York, but in Turkey every possible thing was done not to let it enter and touch our castrated understanding of History a breath from it. The visitors to the tomb of Ferdinand III in Seville seeing the writings on its walls in Arabic, Latin, Hebrew and Castilian Spanish or the writings in Arabic on the altar of San Roman Church in Toledo will understand that Andalusia is not the result of an accident but a model of tolerance realized with the cooperation of Christians and especially the Jews as well.”