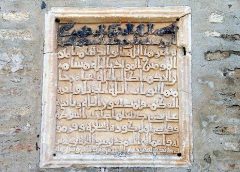 The major development in Andalusian literature was in the realm of poetry. The Andalusians were not really interested in the narrative art, except where it was of a historical nature. Like their predecessors in the Arab East, where the poets of Syria and Iraq formed the literary background, the Andalusians were poets first. Even if there may be doubts about the three lines of Arabic poetry ascribed by Ibn Khaldūn to the Berber Ţāriq ibn Ziād, who led the first conquest of Andalus in 711, it is hard to deny the poetic talents of the

first Arab Umayyad Prince, ‘Abdulraħmān, whose nostalgia flared at the sight of a palm tree in his adopted homeland in Andalus. Like many Umayyad and ‘Abbāsid Califs, the Andalusian princes and Califs were poets who patronized poetry and whatever poetic or musical arts were transported to Andalus from Baghdād or any Eastern Arab city. This indeed came to pass in the reign of ‘Abdulraħmān II (d. 852), who received the Baghdādi poet-singer Ziryāb with his short singing poems and music, thus paving the way for the later appearance of muwashshaħ and zajal, both forms of short poems composed for singing.

The muwashshaħ was a new form of singing poems, totally Andalusian, credited to Muqaddam, the blind bard of Qabra, near Cordoba, in the reign of Prince ‘Abdullah ibn Muħammad (d. 912). The zajal form, another Andalusian invention, was a singing poem in the Cordoban vernacular popularized by Ibn Quzmān (d. 1160). These two forms flourished in the Andalusian courts but were not known in the Arab East until a couple of centuries later. Some scholars believe that these two Andalusian poetic developments had their roots in the poetic development of mukhammas and musammat in ninth-century ‘Abbāsid Baghdād. Other than that, vying with ‘Abbāsid poetry in an attempt to distinguish itself marked the general development of poetry in Andalus. One aspect of that endeavour was the introduction of the kharja, a concluding couplet to the muwashshaħ and zajal in the colloquial or Romance language (Andalusian Latin) as an entertaining exit to a singing session.

These Andalusian poetic developments had a major influence on the rise of the first worldly love lyric in Europe in a language different from Latin, a southern French vernacular called Occitan, or langue d’Oc. The earliest examples of that love lyric are found in the eleven extant lyrics by Guillaume IX (1071-1127), the first troubadour poet in European literature. This gave rise to a long line of troubadour poets who flourished until the late fourteenth century, and was followed by trouvère poetry in the north of France in the langue d’oï. Even though Pope Innocent III marched from Paris at the head of an Albigensian crusade and put an end to the poetry and civilization of the “pagan” south of France, the immediate result was a dispersion of troubadour poets to Sicily, Italy, Switzerland, and Germania. In the Sicilian magna curia, King Frederick II patronized troubadour poetry, and his own poets started writing love lyrics in Occitan, all of which were marked by the unmistakable influence of troubadour poetry.

Troubadour poetry was love poetry; it treated love in a manner that was rejected by the Catholic Church, which considered love outside the Christian context a sin and cupiditas. The love of woman in troubadour poetry, however, ennobles the lover. This was in crass contrast to the Classical attitude, as seen in a pronouncement of Demosthenes, the Athenian orator and philosopher, and in Ovid’s Latin books on love. Both the Greek and Roman traditions considered woman a means of physical pleasure. The love of woman, and submission to her by the lover, was an entirely new and formidable concept in the eyes of Classicists and ecclesiasts. This new love lyric was cast in a form of sections and rhymes unknown in Classical or Medieval Latin verse. Rhyme appeared for the first time in any European poetry in the works of the troubadours. Scholars have found many similarities between troubadour poetry and Andalusian muwashshaħ and zajal in form and attitude to love and woman. Attempts to find precedents in Medieval Latin poetry to compare to troubadour poetry have yielded unconvincing results.

Naturally, the poetic output of the troubadours and the subsequent developments in Sicily and Italy as well as the Germanic countries underwent further changes by virtue of the individual talents of the poets. The Andalusian muwashshaħ form of Al-Abiađ (d. 1125), for instance, is almost mirrored by his contemporary Marcabru’s poem. Furthermore, there are numerous examples that show the close similarity of an Andalusian muwashshah and a troubadour poem in the Provençal language.

A major development in the form of the love lyric took place in Sicily through the “invention” of the sonetto by Jacopo da Lentini (d.1246). This was a love poem of fourteen lines that follows a strict order of rhyme, reminiscent of the muwashshaħ form, which informed the troubadour lyric. Dante Alighieri, the greatest Medieval Italian poet, adopted the sonetto. Then came Petrarca and the poets of the dolce stil nuovo, who were followed by the Renaissance poets in Europe, where we find the sonnet form and love lyric in several European languages. The Andalusian poets started all this. Moreover, Shakespeare’s 154 love sonnets are quite reminiscent of Andalusian love lyrics, bearing in mind the difference in time and place.

Andalusian literature, especially poetry, could instil in modern Arab poets a desire to innovate by opening up more to other forms of “foreign” literature. This has indeed been the case in the Arab world for about two centuries, through translation from “foreign” languages. While Andalusian poetry did not open up except to traditional Arabic poetry, perhaps the Andalusian desire to “excel” is a point to be considered for modern Arabic literature. We have seen that occur in the mid-1950’s; in the significant innovation in poetry’s form and in the use of more symbolism, mythology, and intertextuality. While Andalusian literature was basically informed by traditional Arabic literature, it is curious to think that modern Arabic literature could benefit a great deal from Andalus, setting aside the fact that the muwashshaħ form had already been copied in the Arab East a couple of centuries after its inception. Nevertheless, the muwashshaħ and zajal cannot come up to the great heritage of the Arab East.

A most prominent figure in Andalusian literature was the poet Ibn Zaidūn (1003-1071), a member of an illustrious Cordoban family. His unrequited love for the Princess Wallāda was a leitmotif in his poetry, which was popularized far and wide, even in our own times, especially his poem in noon. (Guillaume IX was born in the year of Ibn Zaidūn’s death.) It is self-evident that the subject matter of unrequited love in Andalusian poetry, and its best examples in Ibn Zaidūn’s poetry, had become a recurring theme in troubadour poetry, which is another innovation in the earliest European poetry.

Two more personalities in Andalusian literature had a significant influence on European literature: one was Ibn Ħazm (994-1064) and his book, Ţawq al-Ħamāma (The Dove Neck Ring), the first book ever to discuss the psychology of love. Andreas Capellanus wrote his De Amore (1186-1190) for the Comtesse Marie de Champaigne, which sounds very much like a paraphrase of the Ţawq. Another Andalusian author was Ibn Ţufail (d. 1185), who wrote Ħay ibn Yaqźān, a philosophical novel, which is strikingly mirrored in Daniel Defoe’s Robinson Crusoe (1719).