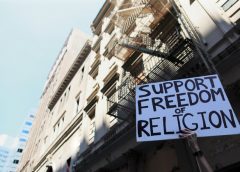 …And will collapse in the US, too.

A report titled “Fear Inc. The Roots of the Islamophobia Network in America” was published recently by Center for American Progress. The report reveals an Islamophobia network which fabricates a wide array of mischaracterized information about a non-existent threat of Islam and Muslims in America. ‘It is not a vast right-wing conspiracy behind the rise of Islamophobia in our nation but rather a small, tightly networked group of misinformation experts guiding an effort that reaches millions of Americans through effective advocates, media partners, and grassroots organizing, that this in-depth investigation reveals,’ says the report.

It discloses details of the Islamophobia Network in America. With “The Islamophobia megaphone” it outlines the structure of the network of “The funders, The misinformation experts, and The Islamophobia echo chamber (The religious right, the political players, the media, the grassroots Organizations).”

“Spreading myths and lies about Islam and American Muslims” is what the experts do travelling the entire country. They claim that “the vast majority of mosques in the country harbour Islamist terrorists or sympathizers” so that they call for a ban on the non-existent threat of ‘Sharia law’ in America.

The report mentions a steady stream of reports, which are paid for and fabricated by organizations like CSP, which becomes source for right-wing politicians, pundits, and grassroots organizations. These reports mischaracterize Islam and warn about the so called dangers of Islam and American Muslims.

The report suggests that a fact-based civil discourse regarding the challenges Americans face as a nation and world must be obtained, which ought to be frank, honest, and consistent with American values of religious liberty, equal justice under the law, and respect for pluralism.

This report reminded us the things Muslims in Turkey suffered during and after the February 28 period in 1997. There was a continuous campaign claiming that some Muslims in Turkey had secret agendas to change Turkey into a sharia state. A struggle against this so called religious fundamentalism was declared.

A high ranked military official expressed his desire of continuing February 28 period saying, “Feb. 28 will last 1,000 years!” This period maintained its grip on the country for years, but today it is lost.

Today many people embrace Islam all over the World, seeing its truth, reasonable explanations of life and human existence, the bliss it gives in this life and hereafter. So, the ultimate aim of these attacks to Islam and Muslims is to prevent non-Muslims from meeting, communicating and interacting with Muslims, and learning first-hand about them.

We wish that American people can realize the manipulations going on in their country and decide not to be made prejudiced by those campaigns and have a look at Islam, search it, and then decide whether it is a danger to their nation and beloveds, or it is a religion that saves humanity in this World and Hereafter.