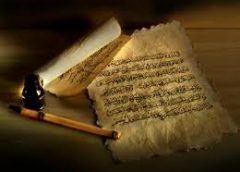 Belief means to accept by heart what was revealed by Allah (SWT) and expressing it with one’s tongue. Sa’d al-Din al-Taftazani says: “Belief is the light (noor) Allah bestows unto the heart of His slaves whom he wishes after they use their own free will.”

Belief can be divided into two: Imitative belief and verified belief. Imitative belief is the one that is acquired by imitating what one’s family and/or friends tell them and teach them about Islam. This type of belief is not based on proofs and researches. So it is not a strong one and is easy to be beaten by doubts.

Verified belief, on the other hand, is the one that is acquired after researches and reaching proofs. Such belief does not easily fail against doubts. Generally Muslim children are taught some basic Islamic information such as the tenets of belief and pillars of Islam. However, when they get older, so do their minds and their ability to criticize and desire to learn about things also increase. Afterwards, they attend the social life and have friendships in which they are subjected to more questions and doubts about Islam. If they don’t study the basic fundamentals of Islam in a detailed way, it is probable that they will lose their faith. We know people who were very religious and read the whole Qur’an many times, but now are afflicted with questions attacking the tenets of belief such as qadar or other Islamic issues or they already became a non-Muslim. Scholars of qalam unanimously agreed that obtaining verified belief is fard (compulsory) saying “Imitative belief is valid, too. But if people of this belief don’t strengthen their beliefs, they become sinners.”

Furthermore, verified belief has three degrees. 1- Certainty at the degree of knowledge (ilm-al yakin) 2- Certainty at the degree of witnessing (ayn-al yakin) 3- Absolute certainty (ayn-al yakin). We can explain these degrees of belief with an example. If you see an amount of smoke rising from behind a mountain, you say: “That smoke indicates the existence of fire and proves it. If there were no fire, there wouldn’t be any smoke. Since there is smoke, there has to be a fire which is the source of that smoke. If I don’t see any smoke, it doesn’t necessarily mean that there is no fire; however, the existence of the smoke proves the existence of the fire.” If you climb the mountain and see the fire for yourself, you better learn the fire’s existence. Moreover, if you touch the fire, you feel its heat and instantly get to know the existence of that fire.

Imam Bediuzzaman Said Nursi states as follows: “There are many degrees in the verified belief, which is stronger and broader. Among these degrees, the degree of certainty at the degree of knowledge (ilm-al yakin) resists thousands of doubts depending on the strength of its many proofs. However, imitative belief is sometimes beaten by one single doubt. Moreover, another degree of verified belief is the certainty at the degree of witnessing (ayn-al yakin), which has many degrees in it. Surely, it has degrees of manifestation in the number of the names of Allah. The one who has this degree of belief reaches the level of being able to read the whole universe like a Qur’an. Another degree of belief is the absolute belief (haqq-al yakin). It also has many degrees. Even if armies of doubt attack those people who have such degree of belief, they can do no harm.” (Isharatu’l I’jaz, from the Risale-i Nur Collection)

“People of witnessing and research concluded that as the verified belief progresses from ilm-al yakin to the absolute certainty, it can never be grabbed. They said: “At the moment of death, the Satan can only let the mind in doubt and cause it into hesitation. This kind of verified belief does not only stay in mind, but also penetrates into the heart, the soul, delicate feelings and is rooted there. So the hand of the Satan cannot reach there and such people’s beliefs are saved.” (Isharatu’l I’jaz, from the Risale-i Nur Collection)

Imam Ali (rh), who was praised by the Prophet (PBUH) as the door of ilm, reached the degree of haqq-al yakin from ilm-al yakin and states the strength of his belief as follows: “Were the curtain of the unseen (ghaib) opened, my belief would not increase.”

“One way of attaining this verified belief is to reach the truth through being a great awliya and through witnessing. This way is particular to the highest of the elite and it is the belief that is at the degree of witnessing. Second way, however, is to approve the truths of belief through believing in the unseen, with the motive of the mystery of revelation, based on proofs and the Qur’an, with the combination of mind and heart, with a strength at the level of haqq-al yakin and with an ilm-al yakin that is at the level of necessity and explicitness.” (Isharatu’l I’jaz, from the Risale-i Nur Collection)

May Allah give grant us the verified belief and reach the level of haqq-al yakin. Amin