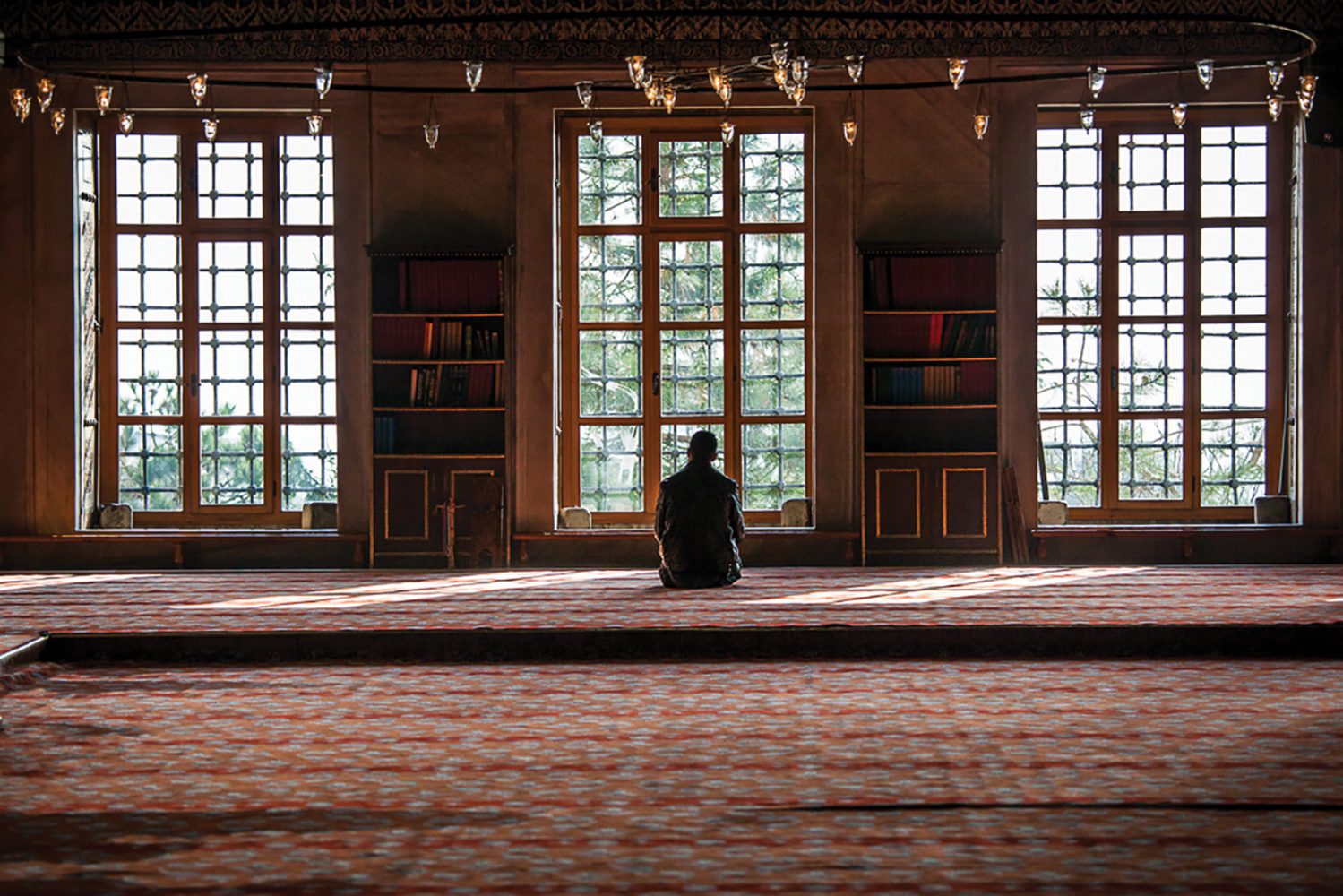 It is a fact that ‘establishing the Prayer and avoiding mortal sins’ are truly human vocations, suited to man’s innately pure disposition.

“The Fifth Word” from the Risale-i Nur Corpus

In the Name of Allah, the Merciful, the Compassionate.

If you want to understand how establishing the Prayer and avoiding mortal sins2 are truly human vocations, and how they are an outcome of the creation of man befitting his innately pure nature,3 then pay attention to this short allegory. Listen!

The allegory of the well-trained and the inexperienced soldiers

The lover of his vocation attached real importance to training and the military struggle. He never thought for a moment about his livelihood or his rations, because he was fully aware that all of this was the responsibility of the state. All was taken care of – his being fed, his being provided with equipment, and his being treated if he became ill, and even a morsel of food being placed into his mouth in a state of need. He saw that his real vocation was military training and military struggle.

He did take care of various things related to readying food and equipment, and he would cook the food, clean the mess-tins, and bring them out. If he was asked ‘what are you doing?’, he would say ‘I am doing compulsory unpaid work for the state’, but would not say, ‘I am working to make my living.’

The gluttonous, inexperienced soldier puts his own lower self before training and the war

The gluttonous and inexperienced soldier, on the other hand, did not care at all for military training, or about the war. He would say ‘What is it to me? It’s the state’s job to take care of it!’ Constantly would he think about his livelihood, gasping after it, to the extent that at times he would leave the regiment to trade in the markets.

One day, his well-trained friend said to him, ‘My brother! Your real vocation is in military training and warfare. That is what you were brought here for! Trust in the king! He will not leave you hungry – this is his responsibility! By yourself, you are powerless and destitute – it’s not everywhere that you will be able to find someone to feed you. Now is a time of war, and mobilisation – they will consider you mutinous and you will be punished! There are two vocations that we need to consider. One of them is the vocation of the king. This is his taking care of providing us with food; and we, for our part, engage in serving him now and then. The other is our vocation. It amounts to training, and war. The king, for his part, helps through facilitating things for us!’

Do you not see, then, the great danger for that unruly soldier, if he does not heed the other fighting, well-trained soldier? You will surely understand that!

The meaning of the allegory

O my lazy lower self! The stormy theatre of war is the tumultuous life of this world. The army, divided into squadrons, is human society. The regiment is the Islamic community of this age. Of our two soldiers, one is the godfearing4 Muslim,5 cognisant of his religious obligations,6 and engaged in acting in accordance with them. He struggles against his own self and against Satan, in order to completely leave mortal sins, and to avoid committing misdeeds.

The other is the open sinner, who is in great loss – who is drowned in worries about making a livelihood and leaves his religious obligations, and perpetrates any sin he happens to run into in his quest to get hold of his daily bread, such that it is as if he maligns the True Provider.

The orders and the training are worship – most especially the Prayer.

As for the two vocations:

One of them is the bestowal of life and providing food, and the other is worshipping, and pleading to the Giver of life, the Provider. It is fully trusting8 in Him, and having complete confidence in Him.

Yes, the One Who created and bestowed upon us dazzling life, which is surely the most miraculous of the works of art of the Independent and Eternally Besought, and the greatest wisdom9 of the Divine, is the only one who provides it with sustenance and causes it to endure. There is no other who could do this. Do you want proof?

The weakest and most stupid of animals are supplied with the finest nourishment. Consider worms in fruit, and fish! Moreover, the beings in creation that are the most powerless and fragile eat the best food, just as in the case of babies and young. Yes, compare fish with foxes, little children with wild beasts, and trees with animals! This should be enough for you to understand that the true means of acquiring a licit livelihood is not one’s having the [innate] capacity to do so; or indeed for one [to make] the right choices. It is only through powerlessness, and weakness!

The person who leaves the Prayer then, for the sake of his concerns about making a livelihood,10 is like the soldier who leaves his training and his trench in order to beg in the markets. Yet to endeavour, after carrying out the Prayer, to oneself secure a livelihood in the kitchens of the mercy of the Generous Provider, in order to avoid being a parasite to other people, is a beautiful endeavour that is both noble-minded and manly. Such an endeavour is a form of real worship.

What we know of the innate disposition of man, and his spiritual faculties, suggests that he was created purely for worship. After all, human beings do not attain to the rank of the merest sparrow in terms of the work and [innate] capabilities necessary to support life in this world. It is rather by his knowledge, and indeed his absolute dependence, supplication and worship, all of which are necessary to sustain his spiritual life and his afterlife, that he is regarded as the king of all living beings, and their commander.

That is to say, if you make the life of this world an end in itself, and strive always for its sake, you may as well be a mere sparrow. If you make the next world your true goal, however, and this world a means and a tillage by which you will attain to it, and work in accordance with that intention, you will be a great commander of all living creatures; and you will be, in this world, a well looked-after, supplicating servant,11 and an honoured and respected guest of  Allah, the Real.

There are two roads in front of you, and it is up to you to choose whichever of them you wish. Ask thus for guidance12 and success, from the Most Merciful of the Merciful.

2. Mortal sins – (al-kabā’ir) – sins, like murder and fornication, clearly prohibited by a Qur’anic or sound hadith text, for which are prescribed particular punishments in this world and the next.

4. al-taqwā – Often translated into English as ‘godfearingness’ – the Arabic literally means ‘to guard’ or ‘protect’ oneself – to abstain from all sins, and submit to the prohibitions of the Sacred Law.

5. muslim – Someone who has assented to the truth of the religion brought by our Prophet Muḥammad, blessings and peace be upon him, and therefore submitted to the will of  Allah, entering thereby into a state of peace and security.

6. Religious obligations – (al-farā’iḍ) – such actions, like the Prayer, as have been made explicitly obligatory in a Qur’anic or sound hadith text.

7. Whims / caprice – (al-hawā) – the human lower self’s inclination towards lusts that it deems pleasurable, without reference to the Sacred Law.

8. Reliance / trust in Allah – (al-tawakkul) – ‘having firm trust and confidence in what is  Allah’s [i.e. everything] and having no confidence in what is everyone else’s [i.e. nothing]. The state of having this tawakkul entails the complete absence of any anxiety vis-a-vis worldly matters, in one’s confidence that Allah, Who owns everything and has control over everything, will take care of one’s affairs.

9. Wisdom – (al-ḥikmah) – one definition is ‘putting things in a place befitting them.’  Allah’s wisdom in creation is His placing beautiful purpose, benefit and harmony into the natures and arrangement thereof.

10. Livelihood / sustenance – (al-rizq) – technically speaking, the word denotes anything that a creature benefits from, including spiritual and intellectual matters. More generally, it refers to their daily sustenance.

11. Servant – (‘abd) – this does not denote oppressive subservience, but rather the necessary ontological relation between the
Necessary Being and His creations.

12. Guidance – (al-hidāyah) – literally ‘something that points to that which causes one to arrive at a goal’ – the goal being, in this case, the actions and states that lead to a fully realised Islam.