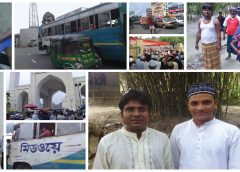 Ten hours after taking off from Istanbul, we landed into Shah Jalal International Airport in Dhaka, Bangladesh. Half of the Bangladeshi people earn less than one dollar a day. That fact reveals itself when you take a glance around the airport as soon as you land. We realized that the buildings, devices, public transportation vehicles and even the clothes on people were quite old. There was a crowd in front of the migration office screaming and shouting at each other. The Bangladeshi people were returning home from the countries they had gone to find work in, because of the high unemployment rate in the country. While they were making noise in the queue, we prayed on a few old rugs haphazardly laid out on the ground in the large hall in full view of everybody. Then we managed to reach the officer who handled the transactions necessary for our documents. After getting out of the airport, we saw there were thousands of people outside lined up all along the road, cheering and shouting to their guests and relatives. Then we were told that in Bangladesh almost everywhere is crowded. This is the ninth largest and most densely populated country of the world with 142 million people in an area of 147 thousand km2.

A brief look at the social and political arena in Bangladesh is enough to understand that, as   with almost everywhere in the Islamic world, this country is also in the grip of ‘ignorance, poverty and feuds’. Bangladesh, which was formerly East Pakistan, fought against Pakistan because of the discrimination imposed on their region by the then central government of Pakistan, and thanks to the support of India they achieved independence in 1971. The country was under military rule until 1990 and it remained an impoverished country and society till then. Since 1990, it has been governed by the Awami League and the Bangladesh Nationalist Party which were elected through free elections alternately. Political analysts say that the division between theAwami League and the Bangladesh Nationalist Party stems from personal animosity rather than any ideological rift. Both parties are secular and Western-oriented. Also, there are relatively smaller parties yet these dissident groups enjoy limited political liberty and freedom of speech; and systematic human rights violations by the state are the daily routine in the country. Particularly Muslim politicians, writers and group leaders are prosecuted based on unproved allegations, and ordinary people are arrested, put in jail and tortured arbitrarily.

We travelled around Dhaka, Gushtiya and Sirajganj during the week that we were in Bangladesh. The infrastructures of the country are in need of urgent restoration. What we concluded from what we saw and heard is that Bangladesh is in fact a rich country with natural beauty and reserves. There has been a recent economic progressive boost in the country. Bangladeshi people are quite hardworking people. Lots of people flock into the cities from the villages to carry people from one place to another with ‘rikshas’ for a few dollars. Many people are doing their best working in the markets and fields to earn a few pennies.

It is also possible to see the reflection of potential riches in Bangladesh in the statistics. Bangladesh gradually decreased its dependency on foreign grants and loans from 85% in 1988 to 2% in 2010. According to FAOSTAT (The Food and Agriculture Organization), Bangladesh is one of the world’s largest producers of rice, potatoes, mangos, pineapples, tropical fruit, onions, bananas, jute and tea. Recently Bangladesh has been ranked as the fourth largest clothing exporter by the WTO (The World Trade Organization). Furthermore, Bangladesh has uranium reserves and a great deal of natural gas.

Then what is the problem with Bangladesh? In spite of all these natural riches and increasing investment why does not the wealth spread to the grassroots of the society? The head of an influential organization that I talked to answers this question as follows: “Bangladesh is not a poor country, but a poorly managed country!” The other people also point to the mismanagement of resources of the country as being responsible for the impoverishment of the country. Another humanitarian aid activist lists the obstacles to growth as being frequent floods, inefficient state-owned enterprises, mismanaged facilities, overpopulation that has outpaced jobs, inefficient use of natural gas and uranium, and political infighting and corruption. The World Bank’s 2005 report on the country reinforces these comments. According to the World Bank, “among Bangladesh’s most significant obstacles to growth are poor governance and weak public institutions”.

However, it seems that bad governance and poor conditions in the country have led people into cooperation and solidarity. There are lots of humanitarian aid organizations in the country. SAWAB (Social Agency for Welfare and Advancement in Bangladesh) is one of these organizations which have been established for fighting poverty and ignorance and spreading welfare in the society. SAWAB and similar organizations are establishing schools to educate the youth and provide them with occupations and work opportunities, spreading hospitals to rural areas for the poor, installing water sanitation centres in the areas with polluted water, taking emergency aid into flood and earthquake hit areas, organizing special programs for Eid al Adha and Ramadan and in this way they are facilitating the hard conditions of life and relieving the bad situation of the poor.

SAWAB in particular provides unemployed people with occupations such as little stores, groceries, artefact shops, etc. through a project called ‘Al Qard Al Hasan’ (an interest free micro credit system) inspired by Islamic solidarity principles. In this way they encourage people to get economically independent and to lead their life without needing anybody’s help.

The prime mover of this project, Bangladeshi Prof. Muhammad Yunus, was awarded the Nobel Peace Prize in 2006 due to his contribution to poor people’s welfare.

There is a huge need for educational institutions in Bangladesh, so people in SAWAB are conducting important educational projects for training youth and providing them with occupational skills. In order for these projects to take place, there is a great need for financial support and for the education of personnel; and SAWAB people have stated that they are open to accepting for every sort of aid from outside the country. As a reliable and competent organization, SAWAB will be happy to act as a distribution point for outsider aid to be spread to the needy of the country.

We met a young man named Hidayatullah studying medicine at a university in one of our expeditions to Gushtiya, an area frequently hit by floods. Hidayatullah has established an aid organization, together with his brother who has master’s degree in ELT, to help people in their region. We went to their office. The place that they were using as an office was also their private room. We sat on a bed and there was a wobbly nailed table in front of us. Hidayatullah was piling whatever he found at home on the table for us. The walls of the room were made of wood and the roof was made of zinc. There was a bulb hanging from the ceiling emanating a yellow light. His brother had stayed and completed his education here. Now, he continues his education in the same room and at the same time, he organizes the aid to his area. After putting everything before us hurriedly, he asked apologetically, “Is there anything wrong with what we have done? Is there anything that you didn’t like? Please forgive us!” Subhanallah! I felt so embarrassed. I wished the earth would swallow me up. What generosity amid all this scarcity and wretchedness!

We realized that in Bangladesh, people who have reached a relatively better position educationally and economically help people around them, which is a good and longed-for behaviour for the Islamic world. Perhaps this is what sustains the Bangladeshi people and keeps them together.

It was very strange that during the whole week that we spent in Bangladesh’s chaotic traffic, we did not witness anybody quarrelling, or infuriating each other. Those calm Bangladeshi people reminded me of the Prophet Ayyub, alayhissalam, who is known for his patience in the face of calamities inflicted upon him by Allah SWT, based on a trial of his servitude and loyalty to Him. I hope and pray, as the Prophet Ayyub recovered from his wounds and losses as a result of his patience, that the Bangladeshi people will recover from their social ills, and develop into a wealthy nation. Why not, if the other Muslims in other parts of the world see their needs and respond with helping hands?