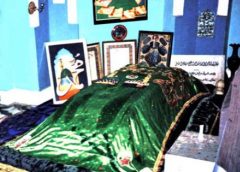 Having learned Arabic language and memorized the Qur’an and many treatises about various sciences at a very young age, Imam-i Rabbani obtained more knowledge than the scholars of his age, and got the ijazah when he was just 17.

Moreover he reached high levels of tasawwuf by taking lessons from Muhammad Baqibillah, one of the seniors of Nakshibend tarikah.

Allah (SWT) bestowed him such knowledge that his teachers used to come and sit before him with respect.

One day Baqibillah, his teacher, comes and sees that Imam-i Rabbani is busy with his heart, so he waits at the door silently and does not disturb him. After a while Imam-i Rabbani stands up and asks, “Who is at the door?” “The poor Muhammed Baki,” answers Baqibillah. Upon hearing his teacher Imam-i Rabbani goes to the door and greets him with decency and modesty. Seyyid Mîr Muhammed, one of the biggest students of Hace Muhammad Baqibillah and scholars of his time, says, “When my teacher, Baqibillah, told me to follow Imam-i Rabbani, I said to him, “The mirror of my heart only looks to your shining light of your heart,” in order to express that there is no need for such a thing. However Baqibillah answered me with a harsh tone of voice, “What do you think who Ahmad is? His light is like a sun which extinguishes the stars like us.”

Imam-i Rabbani is the Mujaddid Alf Thanii- the Mujaddid of the second thousand. “At the advent of every one hundred years a scholar comes to renovate and strengthen Islam,” the hadith narrates. Since there will be no other prophet coming after Prophet Muhammad

(ASM), after a thousand years there must be a person who will revive Islam in every aspect, make it as clean as in the Age of Bliss by wiping out the bid’as (innovations) intervening the religion, and who is a real heir of the entire knowledge, a scholar and a wise person. Hadiths inform us on this issue; and Imam-i Rabbani made this important service in the tenth century.

At the time of Imam-i Rabbani a complicated situation of the belief and doctrines appeared in India. In parallel with a lack of a supreme state power, Muslims, Christians, Judaists, Zoroasters, Brahmans and others were striving to preserve the community of their followers. However, Ekber Shah, the king of the Babur State, struggling to empower his sovereignty, tried every way to disrupt the development of Islam.

Ekber Shah gathered a committee comprising the followers from every religion to form a new move ment of religion by taking the good sides of the existing ones. Muslims, saying that Islam is the last and the only true religion, did not join the so called committee. After this act of Muslims, Shah increased the oppression and tyranny against them. He sent agents among the Muslims to break their unity; but he failed.

Shah banned Muslims to worship together in jemaah and to give their children Muslim names, especially the names of our Prophet (ASM) like Ahmad and Muhammad. India just became a dungeon for the Muslims because of the oppressions and tyranny. And Imam-i Rabbani began his renovation in such circumstances. After the decease of Ekber Shah, his son, Cihangir Shah, followed his father’s way and the disturbance went on. Shi’ites and Rafizis, who were high level diplomats, continued to provoke Cihangir Shah against Muslims and caused Imam-i Rabbani to be imprisoned. They were also trying to impose the idea of Shia and Rafizis to the public as the opinion of the state. To stir controversy among the Muslims, raise doubts about the Hulafa Rashidin and weaken the adherence to our Prophet (ASM)… These were among the aims of different movements of ideas. Imam-i Rabbani wrote the books “Proving the Prophethood,” and “Refusal of Rafizis” in order to eliminate those ideas. And he dealt a big blow to those malign thoughts scattered all around the world. Against the infidelity of the time, the deviant ideas in India, and especially the enmity of the statesman against the Ahl al-Sunnah; the moral corruption resulted from Sikhism and Hindu nationalism, and fake Mahdi movements; Imam-i Rabbani defended the akhlaq (moral) of Qur’an and Sunnah of our Prophet (ASM). He struggled hard to cleanse the religion from superstitions.

Seeing the struggle of Imam-i Rabbani, the Shia administrators took action against him. They casted many aspersions upon him and tried to make Shah to be against him. Finally, they achieved that and Imam-i Rabbani was arrested. He was imprisoned into a castle.

However, Imam-i Rabbani did not stop his struggle there either. He led many people to the right way, including the non-Muslims in the prison; and he made the prison like a Madrasatul Yusuf Alayhissalam.

Among the renovations that Imam-i Rabbani did, the ones about tasawwuf are the most attention grabbing. Since the harmful ideas at that time were scattered through tasawwuf, he focussed on renovating in that manner. He presented an example with the tarikah Mujaddidiyya that he established with his students; so he struggled to eliminate the harmful ideas that the tarikahs were involved in.

The idea of Vahdet al- Vucud in tasawwuf was misinterpreted among Muslims. Many ignorant people, not understanding the words of scholars, abandoned the religion. And so it was tried to be shown as if there was separation and conflict between the knowledge of tasawwuf and the rules of Islam. Muslims were tried to be separated and be made enemies to each other. Imam-i Rabbani explicitly explained many issues- Wahdet al-Wucud primarily- which were misunderstood; and he cleansed the hearts and minds of people from wrong beliefs and bid’as. He spread the creed of Ahl al-Sunnah which our Prophet (ASM) informed as the right and true way.

The scholars at that time called Imam-i Rabbani as “Sila” because of his services. “Sila” means “unifier.” He proved that tasawwuf is not something separate from Islam and actually it is appropriate to Islam; so he unified the rules of Islam with tasawwuf. “Someone named Sila comes among my Ummah. Many people enter paradise with his intercession,” said our Prophet (ASM), heralding the coming of Imam-i Rabbani. (İmâm-ı Süyûtî, Cem’ül-Cevâmi)

Imam-i Rabbani made a dua as follows: “Many thanks to Allah who made me Sila between two oceans.”

He was well-known with the name Sila. Nobody had been named with this name till his time.

Imam-i Rabbani is a matchless, extraordinary scholar and a great wise guide. By means of Imam-I Rabbani, Allah (SWT) separated the right from the wrong, and eliminated the wrong from many hearts.

The letter and books of Imam-i Rabbani awakened many people, and enlightened the world. At a time Muslims were so weak; thousands of people saw his nice manners, listened to his words and became devout Muslims repenting of their sins. From close and far places, many people saw him in real or in dream, and run to him. Scholar, sincere, young and old; many people were present in his lessons and their hearts started recitation (zikr) with enlightenment.