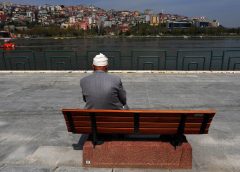 Man forgets many things in his life; what if he forgets his own life?

World is the most precious thing for human. What is more precious than that could only be man’s own (personal) world, which

is … his life. It can be said that there are 6.5 billion worlds (lives) belonging each individual separately in this one unique World. The life of person shapes his private world continuing for some 60-70 years (or hardly more than 100 years).

Many people confuse their world (which is bound to their lives) with the World itself yet. Loving the World so much man supposes that general world to be his private world. This is true from some aspects. Everyone can say, ‘The Earth and every creature in it serve me like a servant; and I am like a royal guest.’

However, this can be a

source of a serious problem if person forgets his own world. When someone forgets his own private world, he never thinks that it is going to end one day. The private worlds are unlike the World itself. The World has got a long life which comes from millions of years ago and will continue probably for more decades. On the other hand, man’s private world is fleeting, transitory, and unstable like his life. No matter how much man does not want to lose his life, it comes to an end one day. And the World will continue its life not even realizing the people born and die.

“A person who forgets himself, not think of life’s fleeting nature, supposes his personal, unstable world to be constant like the general world, and imagine himself to be undying; he will fix himself on the world and embrace it with intense emotions; he will drown in it and depart.”

Forgetting man’s own life and plunging into the World as if he will never die could be but an absolute misery at the end of the day.

He forgets the meaning of his life, his duty and responsibilities. He supposes the World gives him life, makes him happy and continue his living. In other words, he forgets his Creator, Allah SWT.

Man must never forget that his life is transient. Otherwise, he forgets Allah SWT and forgets his own soul. At the end he becomes but a rebellious transgressor.