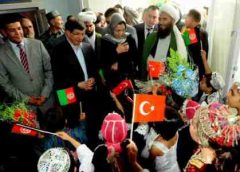 The Minister of Foreign Affairs Mr. Prof. Ahmet Davutoğlu shared a memory in a speech he made in a symposium: “I went to Afghanistan for an official meeting.  After one to one and delegation meetings, I visited some of the cities and governors with the president of TIKA and my aides. In these visits, I came across almost always with the same picture: After the greetings, the governors immediately get down to their real intention and start complaining about the insufficiencies and have some demands from us. One of the diplomats with me said after the meeting, “It is as if we met with the governor of Konya (a city in Turkey) not Kabul. This phrase concisely describes how they see us and our country. Not so long after this, we went to Bosnia-Herzegovina for an official visit. During the visit, the situation was similar to that of Afghanistan. At this point, we have to ask this question: What are the reasons causing a governor in Afghanistan and another from Bosnia feel in the same way and make them comfortable while demanding something from Turkey?”

Those words mean a lot more than just a mere memory. They show a vision, a historical responsibility which cannot be ignored. We can add lots of other nations and countries sharing the same mentality and geography with us to the aforementioned ones. There is no need to explain the historical and extra political reasons behind this perception of Turkey; the important thing is to satisfy this perception, to pass this heritage without damaging next generations within the chest of consciousness.

In the way of becoming a powerful country, If Turkey wants to carry her regional influence and power coming from her historical and geographical depth in the region to the global arena, she should analyze this situation very well, and acting with responsibility should not waste the opportunities like she did right after the cold war.

Unfortunately those opportunities, efforts integration within our geography in all areas, the endeavor of using the opportunities coming from the historical depth while rising on the global arena are always subjected to wrong accusations such as axial dislocation, neo-ottomanism and statements lacking any kind of reason and mercy made in delirium such as “Have we resolved our problems? Why should we deal with the problems of Afghans’, Arabs’, etc.? We should know that responding to the voice of the Balkans, Middle East, and Caucasus is not a favour, it is a must for Turkey’s stability and peace in every area.