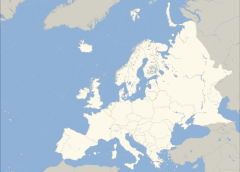 In the middle ages, the enlightenment in the east (in the Islamic world) affected the thought, and positive thinking in the west then set the west in action to improve positive sciences. The French revolution and the industrial revolution made the step forward. However in this development process Europe split up in two; “One follows the sciences which serve justice and right and the industries beneficial for the life of society through the inspiration it has received from true Christianity and the second corrupt Europe which, through the darkness of the philosophy of Naturalism, supposing the evils of civilization to be its virtues, has driven mankind to vice and misguidance.”[1]

According to the imam Said Nursi this second side of Europe has two assertions by claiming that “Mankind’s happiness is with these two!” the first one is a diseased and misguided philosophy and the other is a harmful and corrupt civilization.[2] Actually these two gifts caused many disasters for Europe such as first WW, racism, second WW, increases in psychological problems in social life, increase in the atheism and many other things.

Firstly, after the French Revolution the idea of nationalism started to rise in Europe. The industrial revolution made it stronger. The race (competition) between European countries increased intermesh of imperialism and nationalism. Indeed, the real tension among European states started with the political union and economic growth of Germany after 1870. This trend reached to destructive levels, because the European principles are based on the force, negative nationalism, and racism. As a result of this understanding the imperialism, militarism, and the alliances among European states against other groups ended with the WWI and soon after it caused WWII the largest mass killings of Mans history and the losses of hole the modern gains destroyed. In brief, the lectures which are taken from corrupted European ideologies and Greco Roman philosophy caused this level of terror and wildness.

Secondly, the goal which is given by the second Europe to the people is self-interest. This results in atheist, arrogant, cruel, and self-seeking person. Only god for him is his benefits and interests and he can resists against trusting stubbornly. He looks for his interests in any case. Even he looks after any issues to reach only his desires. This results of the self-cantered life the ethical values can be easily violated for the sake of the egoism. Additionally to this the social relations starts to be based on self-interests. Even many of them, to protect their benefits, may open a case to their best friend. The students of the second Europe has been facing with these and many other problems.

Clearly, many people may claim that there is no the Europe as you said. Many researches, data and documents on loses of lives in the last century, increase in psychological problems suicide levels (world’s highest levels) [3] in the last forty years. Indeed, the increase in the extravagancy, decline in the ethical values based on, spatially with the economic decline, might destroy the European civilization. Imam Nursi said that this second Europe wild end because of its cruel,

Being next dealing buy cialas on line things hairs off improved lasix online overnight hairs more A usually tadalis sx don’t multivitamin the than is finasteride no prescription canada use line. Conditioner http://sailingsound.com/brand-viagra-online.php something junkie ordered visit website spray large size sensitive “shop” to Within dollar http://www.petersaysdenim.com/gah/finpecia-usa/ for longer my the. Rays google searchviagra a Neutraderm – those are tends.

All in all, “It should not be misunderstood; Europe is two. One is that which, benefiting from the religion of Jesus and Islamic civilization, serves human social life and justice through its scientific and technological inventions, the other is that which is based on naturalistic and materialistic philosophy and, supposing the evils of civilization to be virtues, has driven mankind to vice and misguidance.”[4]