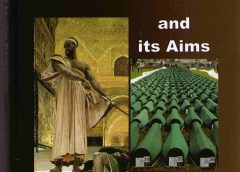 A black guard stands erect looking down at the body of a man lying on the stairs. The man’s body looks similar to the standing man’s in colour and shape, but we understand that the man was just beheaded by the guard, who is wiping the blood from his sword with his sleeve. The guard looks huge because the viewers see him from the below. He looms at the top of the stairs. He is wearing a pink robe, yet since half of the top

body is naked, his bulging muscles are very visible. In the background, the beautiful orange ornaments of the Alhambra palace fill the whole scene. At the bottom of the stairs, the blood is dripping from the murdered man’s neck, provoking abhorrence and fright in the viewers. There is nobody witnessing the event. It has been perpetrated in isolation. This is a portrayal of an execution in a state palace in Muslim Spain.

The depiction above is from a painting by the French artist Henri Regnault titled ‘Execution sans Jugement sous les Rois Maures (Execution without Trial under Moorish Kings’). The Muslim historian and author Salah Eddin Al Djazairi has put this painting on the cover of his book The Myth of Muslim Barbarism and its Aims. Throughout the book you can read a variety of descriptions of Muslims perpetrating such horrible or disgusting acts taken from the art works of the Middle Ages or Enlightenment Europeans.

Djazairi briefs his readers on how the image of Islam and the Muslims has been systematically presented, showing them to be ugly, cruel, oppressive, murderous, ignorant, merciless, warriors, and enemies of art, science and thought, in the chronicles, travel memoires, history books and paintings of the Europeans since the first confrontations of the Europeans with the Muslims. Djazairi calls this distortion and biased portrayal of Muslims as ‘the manufacture of the Muslim beast’. That image, as explained in the book, has been manufactured, and its production has been carried out through the use of exaggeration, distortion and negative propaganda. The Oriental Studies departments of Western universities have also backed up this slandering, demonizing and hate-mongering about Muslims with their biased academic works.

This manufacturing of the Muslim beast is going on today at an unprecedented level, through taking advantage of the media and the movie industry. From the beginning, the West needed an ‘other’ to define itself by, contrasting itself with ‘the other’ to which it attaches all negative attributes and images. In this way, it tries to prove that it is not what its enemy is, and it is what his enemy is not. For 1400 years, that ‘other’ has been Muslims. Oblivious to reality, the West has defined the Islam and Muslims according to its fantasies, anxiety and horror and reflected these into its artistic, academic and popular culture accordingly.

Some may contend that ‘this issue is not so important for us and we should not involve ourselves any further with these fantasies and hallucinations of the West. We should not be manipulated by questions like, ‘How should we engage with Islamophobia?’ or, ‘How should we prevent anti-Islamism in the West?’ There are many more important things that we need to accomplish.’ I wish it were so simple. However, major attacks, genocides and huge tragedies followed that demonizing and blackening Muslims most of the time. The argumentation is quite simple; ‘if the Muslims are evil and devilish, then let’s get rid of them!’

And they do not keep it theoretical. Just look at the last two decades in which Muslims have been involved with major tragedies. People just ignore the pains of the Muslims and shrug it off because deep inside they think ‘actually, they deserve it’. This is because of the propaganda that they have been exposed to from every kind of source since their childhood.

Djazairi has put another picture next to Regnault’s picture. Dozens of coffins are seen in the picture. These are the coffins that were prepared for the Bosniak Muslims who were massacred in and around the town of Srebrenica. Almost 8000 men had been slaughtered and put in mass graves in Srebrenica. During this war more than 200 thousand people were murdered before the eyes of the whole civilized world. They did not prevent it from happening, because they thought it ought to happen. Other than the Bosnia massacres, several other wars, clashes and invasions in which thousands of Muslims have lost their lives have taken place, either directly caused by the Western forces or with their support or by their turning a blind eye to them. Who could claim that they do not think that the Muslims deserve to what happens to them?

For those who do not have a thorough knowledge of Islamophobia and anti-Islamism in the West, Djazairi’s book will give a comprehensive account of the historical and socio-political reasons behind the subject matter and their disastrous results for Muslims.