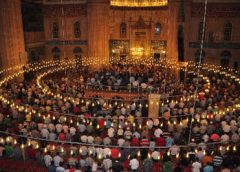 The Love for Enmity

One of the most important reasons of the misunderstandings, disputes, and conflicts among Muslims and Muslim states is the love for enmity. It is necessary to love other Muslims for the order in social life. Today, instead of love, brothers and sisters, relatives, friends, and other Muslims easily become enemy and hate each other. However if we want to have a proper and peaceful social life we should demand love. We need to love the love. We have to be aware that there are many qualities and good behaviors in loving a Muslim rather than to hate him because of a single mistake. Indeed, to have good opinion of others makes a person’s character better. There are some aspects that they poison human life. “Dispute, discord, partisanship, obstinacy, and envy cause rancor and enmity among believers, and therefore are the sins that harm personal, social, and spiritual life. Truth and wisdom, as well as Islam (the viewpoint of supreme humanity) all prove this.”[1]

Firstly, enmity is wrong is wrong from the viewpoint of truth and wisdom. Because there are many good behavior and values a Muslim person has and also there are many things that you have income with other believers. Just because a single mistake or wrong against you, you should not put away from him all of the values. “Both of you serve the same One Creator, Sovereign, Object of Worship, Provider… so there are as many ties between you as there are Divine Names. Your Prophet, religion [Islam], and qibla are one and the same, and the number of such ties amount to almost a hundred. Your town, country, and state is one, and tens of things are one and the same for you.” Enmity and love opposite like light and dark and they cannot stay together in a place. We need to love truly Muslims. In this way, the enmity and hate cannot stay in our hart and it turns to pity for those who have wrong actions and sins. We need to consider that our Prophet (PBUH) did not break hearts and he was kind to other Muslims even if there is no violent and attack he was kind to non-Muslims, too.

Secondly, “According to the verse: No soul bears the load of another[2] which expresses absolute justice, nurturing rancor and enmity for believers is like condemning all of their innocent attributes on account of one criminal attribute—a very great injustice indeed! If you extend your enmity to their relatives, you are the object of People are much given to wrongdoing.[3] Since truth and Islam’s law and wisdom warn you against such a great injustice, how can you consider yourself to be right?”[4]

Next, there are some details in our social life which have big impacts on our personal life. Westerners used it to divide Muslims and then we became weak and vulnerable. For example, there are many social groups, religious sects ex… in Islamic world, but most of them are blaming each other for many reasons and by not excepting any truth from them, they do not even look what are the things that they are income. “We may be justified in saying: “My way is right and better.” But you cannot say: “Only my way is right.” As we know, “the eye of contentment is too dim to perceive faults, whereas the eye of anger exhibits all vice.” So your unjust view and distorted opinion cannot judge between the ways, and should not condemn another’s way as wrong.” We do not forget and We need to start to change our direction of hate that “If we wish to nourish enmity, then we direct it against the enmity in your heart, and attempt to rid yourself of it. Be an enemy to your evil-commanding soul and its caprice and attempt to reform it, for it inflicts more harm on you than all else.”[5]

Moreover, obstinacy and partisanship are two risky things which may harm social life. “if it is said that there is a Hadith which says: ‘Difference among my people is an instance of Divine Mercy,’ and difference requires partisanship”[6]  and also the sickness of partisanship delivers the oppressed common people from the oppressor elite, for if the elite of a town or village join together, they will destroy the oppressed common people. If there is partisanship, the oppressed may seek refuge with one of the parties and thus save himself. First, “the difference intended in the Hadith is a positive difference. That is, each party strives to promote and diffuse its own belief; it does not seek to tear down and destroy that of the other, but rather to improve and reform it. Negative difference is rejected by the Hadith, for it aims in partisan and hostile fashion at mutual destruction, and those who are at each other’s throats cannot act positively.”[7] Secondly, “If partisanship is in the name of truth, it can become a refuge for those seeking their rights. But as for the partisanship obtaining now, biased and self-centred, it can only be a refuge for the unjust and a point of support for them. For if a devil comes to a man engaged in biased partisanship, encourages him in his ideas and takes his side, that man will call down God’s blessings on the Devil. But if the opposing side is joined by a man of angelic nature, then he will -may God protect us!- go so far as to invoke curses upon him. Shortly, If one does not make of the exalted rules, ‘Love for the sake of Allah, dislike for the sake of Allah, judgement for the sake of Allah’[8]  the guiding principles of one’s conduct, dispute and discord will result. If one does not say, “dislike for the sake of God, judgement for the sake of God” and take due account of those principles, one’s attempts to do justice will result in injustice.”[9]

In Short: if you have any interest in your social solidarity, then make of the exalted principle of  “The believers are together like a well-founded building, one part of which supports the other”[10] your guiding principle in life! Love, brotherhood, and affection are basic to Islam, and are its bond. The people of enmity resemble a spoilt child who wants to cry. He looks for an excuse, and something as insignificant as a fly’s wing becomes the pretext. They resemble too an unfair, pessimistic person who so long as it is possible to distrust, never thinks favourably. He ignores ten good deeds due to one bad deed. Fairness and favourable thinking, which mark the Islamic character, reject this.[11]