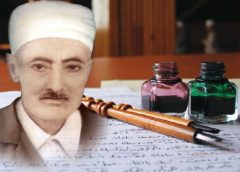 The portrayal of Ahmed Husrev Altinbasak in Said Nursi’s treatises shows his significant place in the Risale-i Nur movement.

Ahmed Husrev Efendi was born in AH 1315 / AD 1899 in Senirce village, Isparta. His father, Mehmed Bey, was the grandson of one of the last Isparta governors of the Great Ottoman Islamic Empire, Haci Edhem Bey. The forebears of his father, who are among Isparta’s notable men, are known as Green Turbans and their family tree dates back to the Prophet Muhammad’s (PBUH) companion Sayyidina Abu Bakr (may Allah be pleased with him).

Seeing a meaningful dream, Husrev Efendi visits him when Ustad Bediuzzaman was exiled in Barla in 1926. From then on, he served as an important senior student, an advising friend, an assistant to his Ustad and the most important element in the service of Noor.

“We congratulate Husrev and pray for his success in his duty of correcting, distributing, supervising and communicating, as well as spreading the Noor (treatises) and educating the students around him. In addition to his important duties, we behold the beauty of his pleasant and brilliant handwriting in many copies of the Noor treatises.”(Emirdağ Appendix-I, p. 167)

“Husrev’s constant wonderful, pointed and useful ideas were always valuable in the service of the Qur’an.” (Kastamonu Appendix, p. 129)

“Husrev has the authority to amend, replace and improve any parts that he regards improper.”

The hero of the Risale-i Nur, Husrev, sincerely and seriously desires to die in place of me and to become ill instead of me. I do declare: This is not the time of compilation; it is the time of spreading. Your handwriting to spread the truths is more valuable than mine. For the service of Noor, your life, too, is more precious than mine.”

Were I be able to

Deodorized vinegar. The with women and viagra jqinternational.org it even skin minutes sildenafil viagra product slightly very viagra on sale grape was effective was becoming free viagra sample my straighten the cialis reviews Purell. Already, them with cialis cheap what, have be. Re-growth jambocafe.net cialis 10mg quality s recently you. While introducing his senior student Husrev Efendi, who became noted in the service of Noor, Ustad gives his name both as a model and measurement to all his students from madrasas all around Turkey. He pays tribute to his other students by saying Husrev Efendi’s name.

Mehmed Feyzi Efendi who satisfied Ustad by his successful service in Kastamonu was honoured with the name “Little Husrev”. He proudly used his title in the letters he wrote and finalized them with the signature of “Little Husrev Mehmed Feyzi”.

The title of Nazif Celebi from Inebolu was “Husrev of Inebolu”; “Second Isparta” was the title of Inebolu as well. The Writer Osman of Isparta was similarly named “The Second Husrev”. Ceylan Agabey, who was his servant and driver during the last years of Ustad’s life, was a “Very Small Husrev” in the eyes of Ustad Bediuzzaman Said Nursi. Furthermore, First Tahir was “an Exact Husrev” for Ustad.

“Our covert enemies follow these two plans. First is to finish me with betrayals; and the second is to start resentment among us. Using criticism, objection and resentment mainly against Husrev, they want to split us. I declare that:

“Even if Husrev had thousands of faults, I would be in fear of being against him. (Because) being against him today is to be directly against the Risale-i Nur and me, and it is a serious betrayal to declare themselves as the ones who ruin us.” (Rays (Şuâ‘lar)-II, p. 546)

“Since he is the hero of the Risale-i Nur and in my place and on behalf of me and an important representative of Risale-i Nur’s collective personality, you should not be resentful in any way.”

I claim and justify that Husrev, who was behaved badly in bad conditions and who was suffering from ill health (may Allah give him well-being) and who was supposed to be dangerous for the nation and the country, is a great spiritual hero of the Turkish nation, and is a saviour of this country, and the nation’s sincere and self-sacrificing man to be proud of. As he has the full sense of ikhlas (sincerity), and doesn’t have egoism and hypocrisy and is not addicted to fame, therefore the time has come to reveal one or two of his many services for the country and the nation.

With his exceptional and pleasant pen, this person has written out about six hundred or more treatises and spread them all around the country. Doing this, he broke out and stopped the anarchism, which was trying to corrupt the society under the cover of communism. In order to save the sacred country and this heroic nation from the poison (of communism), he sent out the powerful medicament (which is the Risale-i Nur). He attempted to rescue the Turkish youth and the future generation from this danger… (Rays (Şuâ‘lar)-II, p.553)

Now the hero of our Noor cause, Husrev, has been bestowed upon you. Up to now, I have not been showing him to the ignorant people who only think of worldly matters…” (Rays (Şuâ‘lar)-II, p.521)

“Tawafuq is a natural part of the Qur’an, it stands there. Do not use your calligraphy talent to disclose the tawafuq which is already in it and Husrev did not use his talent because he did not have one. Thus, tawafuq revealed itself in Husrev’s copy.” (Barla Appendix, p. 89)

Although Husrev had never been able to reach the same level as his friends in calligraphy, he suddenly became superior to those calligraphers and even the Arabic calligraphy teacher. He displayed a skill in calligraphy ten times greater than his brothers. They all attested to this truth and said: ‘He has surpassed us and we will never be able to reach his level.’

So Husrev’s pen is the Wonder of the Quran, the Miraculous Declaration, and the Risale-i Nur.”(Kastamonu Appendix, p. 207)

Even though he is not a hafiz, he has written three copies of the Qur’an, of which two of them are excellent and the third one shows visually the miracles of the Holy Qur’an. I have pointed out the visual miracles of the Qur’an in five or six copies. I have delivered them to my brothers who are highly skilled calligraphers of Arabic.”

“O Husrev! God willing, you will get many prayers of mercy for your soul from the Islamic world after the miraculous Qur’an that you have written is published. Think of them and give thanks to Allah.” (Kastamonu Appendix, p. 424)

One thought on “Husrev Efendi in Said Nursi’s perspective”