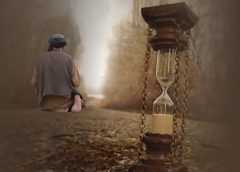 As a country we have recently gone through – and still we are going through – very important processes. In the geography we live in there have been very heated and continuously changing events. People have difficulty in even just following these events. National and global news busy us too much. Without even realizing it, we abandon our responsibilities due to our “busyness.” We neglect our real duties with the pretext of worldly activities. This situation actually lays extra burden on us. At this point, we remember a letter of our beloved master which he wrote to one of his students who was in a similar situation.

Imam Bediuzzaman Said Nursi tells the importance of the circle of service [dawah] for which the Risale-i Nur students are responsible and with which they must keep themselves busy:

“My valuable brothers, know that the duty with which the Risale-i Nur and its students occupy themselves is bigger than all the great issues on the earth. For this reason, do not get bored with your eternal duty by looking at the worldly affairs that excite curiosity.” 1

Imam Bediuzzaman tells that the Nur students cannot act like the people of the world, and if they do so and surpass the limits for following the world affairs [e.g. politics], he says that they will get harm regarding the service:

“The people of irreligion struggle against the temporary life. We [the people of religion] are in a struggle against the death with the light of the Qur’an. Their biggest issue – since it is temporary – cannot be equivalent of the smallest of our issues, because it is related to eternity. Now that they do not interfere with our great issues because of their stupidity, why do we curiously follow their insignificant issues to the disadvantage of our blessed duty?” 2

Imam Bediuzzaman tested a student, and then made him correct his mistake with a severe warning: “I tested a student of Risale-i Nur. Wondering his opinion about current politics I asked one or two things due to his loose talk about the straits [of Turkey]. He answered interestedly. I said in my heart, “What a pity! He will make a loss in this duty of light.” Then I warned him severely.” 3

Now, in the light of this explanation, let’s touch on some principles about service.

Principle: Since the Risale-i Nur students serve the faith of people, they are fulfilling the most important duty. Worldly matters and other issues of the religion should come after the matter of faith. There is no other deed that is more virtuous than serving the faith. In a narration the importance of serving the faith is reported as follows: Sahl ibn Sa’d (ra) narrated: “The Messenger of Allah (pbuh) said: By Allah, if a single person is guided by Allah through you, it will be better for you than a whole lot of red camels.” 4 In another narration it is said, “it will be better for you than all the things that the sun rises upon.”

Principle: Students of Risale-i Nur must first busy themselves with the duties they are responsible for. Otherwise, they will have to answer for what they busy themselves with. The duty of every student of Risale-i Nur is to try to save his own faith and save others’ as well. It would be a great harm if the worldly, trivial, futile matters take precedence over and prevent the spiritual services of the Risale-i Nur students. This unnecessary busyness may even cause them to fall into sin.

Imam Nursi does not ask anything about World War II and the developments about it. Upon this, his students ask him the reason for his lack of interest. They get the following answer:  “Since the duty of the Risale-i Nur students is the faith, worldly affairs do not interest them too much. Therefore, because of this reality, I have the right to not follow (the world affairs) even thirteen years, let alone three months. You have followed; what have you gained apart from nothing but sins? I have not followed, what have I lost?” 5

Principle: Preferring the worldly, political matters to the spiritual duties may also cause hopelessness and depression along with spiritual harms. You can of course be up to date about worldly and political affairs but you must not go too far and religious service should not halt. This is because following the political events with too much attention and curiosity harms the soundness of the mind and heart. As a matter fact, your influence to the wider circles [e.g. politics] is very limited and ineffective. And this may cause despair.

Imam Bediuzzaman expresses how someone, who follows political conflicts, wars and struggles of interests in the wide worldly circles, will lose the soundness of the mind, heart and soul as a result of giving up their lofty duties as follows:

“It is also harmful to be involved mentally and at heart in the causes and struggles other than this true and big cause. This is because a person who pays attention to and occupies himself with these kinds of wide, political and exciting circles [events] neglects his important services for which he is responsible in the smaller circles; or he demotivates himself regarding his duty.  Moreover, sometimes someone who attentively follows those wide, interesting circles of politics and struggles gets carried away and cannot do his duty anymore. Moreover, although he may not lose the soundness of his heart, his good intention and the direction of his thought, and his sincerity in the service, he may face such accusations.” 6

Our beloved master explains that there is also the dimension of oppression while following the worldly affairs: “Sometimes those who curiously follow these wars become in favour of one side at heart. They tolerate the oppression of that side, and share the responsibility of that oppression.” 7

This situation is really dangerous. Without having reliable information, we may make a mistake and become in favour of oppression by supposing the oppressor right and the oppressed wrong with the influence of the intentional news on the media. The news of the biased media must certainly be evaluated by confirmation. The moment you applaud the oppressors you become a partner to all their oppression.

As it is understood from these words, laziness in lofty services, heedlessness or neglecting the duties due to different reasons, harm a person spiritually. Those who follow the political disputes in the wide circle, the economic and social incidents in an unhealthy and exceeding manner will face the danger of being harmed in terms of the world and hereafter.

Principle: Imam Bediuzzaman categorizes the responsibility circles [areas] of the human being as follows:

“Life’s capital is very little and the work to be done is much. There are spheres one within the other like concentric circles, from the sphere of man’s heart and stomach, and that of his home and body, and that of the quarter in which he lives and his town, and his country and land, and the globe and mankind, to the spheres of animate beings and the world. Each person may have duties in each of those spheres, but the most important and permanent of these are those in the smallest sphere. While his least important and temporary duties may be in the largest sphere. According to this analogy, the largest and smallest are in inverse proportion. But because of the attractiveness of the largest sphere, it causes the person to neglect his important, necessary duties in the small sphere, busying him with unnecessary, trivial, peripheral matters. It destroys the capital of his life for nothing. It kills his precious life on worthless things.” 8

The smallest circle that the human being is busy with is the circle of heart. The circle of heart is the place of faith. The light of faith takes root in the heart. From there it spreads to the mind, soul, and faculties. The strength of the faith makes human beings nominees for the happiness both in this world and the hereafter. Therefore, the biggest responsibility of human beings is to enlighten their hearts with the truths of the faith; to acquire critically verified faith that is unshakable and indestructible, that is to learn the fundamentals of faith and belief with proofs. The critically verified faith guides the material and spiritual life of human beings. The spiritual maturity of human beings influences their families, relatives and neighbourhoods. A person who has acquired the perfect faith can sometimes gain as much value as a nation.

Principle: Another issue Imam Said Nursi draws attention to is that people spend their invaluable lifetime with trivial things. One of the preoccupations that keep one’s life occupied most is the social media madness. With the smartphones, the illness of isolating oneself from social life has become widespread and contagious. Smartphones have been causing horrible destruction and mischief with people’s insensible use, who have become captives of their feelings. Our master says the following while describing the trouble which the youth face:

“One day, while I was looking at the street, I felt a powerful example of that mischief. I felt bad for the youth. I said: These helpless youth cannot protect themselves from the fire of this mischief which pulls them like a magnet.” 9

The sins in the streets are now right in our houses with smartphones. As a result of careless, excessive and limitless use of smartphones, the veil of modesty has been torn, chastity and honour have been harmed and people have surrendered to this epidemic illness. There is an abundance of showing off, arrogance, ambition and anger in the photos and videos on social media. Personal photos and videos, and things like the declaration of love are seen by unrelated people. So many invaluable hours and days of this transient life are spent simply on the phones.

Here, the responsible people – father and mother being in the first place – have great responsibilities. Dispelling the evil comes before bringing the good. We and our family members must learn to use the social media in the correct way and save ourselves from unnecessary use. How we spend our time is as important as the things we share on social media like Facebook, Twitter and Instagram.

Lastly, it is a reality that the individuals and families who have been affected by the social media epidemic are experiencing a lot of troubles. Today, the things shared on social media have become one of the reasons for an increase in divorce. There are also social media crime trials in the courts. It is no longer just a matter of “a loss of time”; it has gone beyond that. And this situation urges us to be more conscious and careful. It is urgent to take necessary precautions for the goodness of the mind, soul, heart and social relations. Especially leaving the youth completely free on the social media may lead to irreparable destruction. I think a limited and controlled use would be good for everyone.