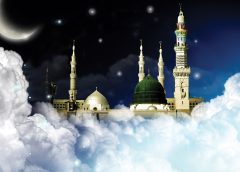 This is the way Hasan al-Basri describes the spiritual enthusiasm in the first season of the rose garden of our Prophet (alayhissalatu wassalam) who has been sent as mercy to the worlds. May Allah’s mercy be upon Hasan al-Basri. This is the observation and comparison of the tabi’un (the followers) about the obedience to and living the Qur’an and Sunnah of over one hundred sahabas (companions) from whose hearts the love for the Prophet is felt warmly, and from whose eyes the honour of having seen the Messenger of Allah is reflecting.

What is highlighted here is actually “the commitment and love” of the first ring of the bright chain – from the stars of the Age of Bliss to the End Times – to the Prophet Muhammad (peace and blessings be upon him); their adherence to the Messenger of Allah with a strength that can carry all the centuries.

Yes, when we remember them, maybe the first thing we read is “My companions are like the stars” said by the blessed Messenger of Allah. He has spoken the truth.

Each of them is the stars that take the light of their minds and hearts, and the warmth of their hearts from the sun of the universe [pbuh]. By taking the same light and warmth from them, every following ring of the luminous chain [Muslims in following centuries] held onto the previous rings tightly. Centuries have taken the form of the atmosphere of the Age of Bliss with the colour of the two trusts. Although this colour has seemingly faded sometimes on the earth because of the mistakes of the human beings, it has never changed in the lands which are based on hearts with the justice of destiny…

Each of them (radiallahu anhum) became a great value. They carried the faith and moral values which we need today more than ever.

In order to stabilize our hearts in the best state in the face of the turbulence of today, we should follow the stars directing our compass, which is hung at the dome of the tent of our hearts, at different hours and conditions.

In this way, having different characters we can find and follow the direction of moral values – which our hearts need and which we should embrace – without mistake and with the help of these “values” called stars.

Yes, each of them (r.a.) has a fragrance from the Graceful Rose (pbuh).

And sometimes fraternity, sincerity, sacrifice take the Muslim hearts, which beat all together, with a pleasant breeze from the companions. This is because with the like of this fragrance spread from the same garden, similar fine meanings are passed down to the hearts which are bonded together with the bond of faith.

Although the times and places differ, the sky of the country of the hearts of the ummah, which is one nation, is filled with the rose fragrance of the Messenger (pbuh).

Yes, they (may Allah be pleased with them) are examples for us. They are examples to be followed about how to take the Messenger as an example.

The education of “what decency is in the presence of the Beloved of Allah” is with them (r.a.).

May Allah be pleased with the companions who resembled him (pbuh) with the command of our Lord, took their light from him (pbuh) and had the moral of the Qur’an like him (pbuh), and who guided the ummah in carrying the trust!