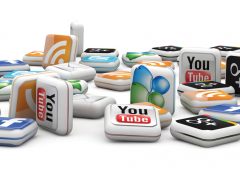 One day I was walking to the metro station after my class at the faculty. I intended to read the book I had read that morning while coming from home to school. So I hurried down the stairs to find an empty seat. And I got one! I found one at the back of the carriage and started reading at once when I took the seat. I continued so for about 5 or 6 stations. After a while my eyes got tired and I gave up reading. I noticed the young people in the carriage and I closed my book to observe them. Hands are up… Heads are bent… They were all paying attention to their smartphones. These young people who were at school together during the day were now like strangers and were not talking to each other.

After a while the metro entered a tunnel and its lights turned on. Somehow one of the young people leaned over and mentioned  something to his friend. They started a conversation. The others wondered what they were talking about and joined them. What just happened to these young people who were in a vacuum away from the world? Why did they start to talk? Until I took my phone and looked and saw the warning “no service” everything was a mystery to me. Now, I understood why…

Yes, we are not unfamiliar with the phenomenon above. The bosses of social media, Facebook, which takes our hours, Twitter which is confined to 140 characters, Instagram, the dump of photos and many more… We have been attached to these so much that we have started to forget family, relatives and friends. It has not stopped there; we have seen both physical and psychological harmful effects of it in respect to family communication the most.

Your family cannot be reached at the moment…

Social media and technology move the individuals away to different states and realities existing just on a little screen. As a matter of fact, we must think carefully whether this is really “being social” or “a deviation from important values” that make us humans. When a person who fails to have a social relation with his family says “I am social” with people on social media, this puts a question mark in the minds. If a person surfs on social media, has chats, kills time until 3 am in the morning and then wakes up late and spends a sleepy day, it is not a socializing; it is actually to be in search of something. It does not matter whatever cultural position we have or whichever job we do, if we turn into individuals who cannot check themselves in front of the screen, and if families get harm due to this, we cause the foundation of our family, let alone family communication, to be on a slippery ground.

Since smartphones, one of the latest products of technology, came into our lives, our sharing on social media has increased to an unbelievable extent. It is such that one touch on the screen is enough to share everything with the world; a cake before we eat, a gift before we give, a new dress before we wear, kebabs and desserts before our guests sit down to the table. The number of “likes” becomes the subject of conversation long before we actually eat the food.

Sometimes adults who use social media look like this: When the parents of a 5-year-old girl buy a new dress to her, she excitingly says to her friends “Look, look what my mother bought me!” That is, our childish self which has not matured yet, reveals itself as wishing to be popular and to be liked on social media platforms.

In fact, if an activity or a place you visit is not shared on Instagram or Facebook, it seems as if there is something missing. Friends meet at a place and they order. First they take photos of the meal and share them on social media; then the comments. After the pleasure of “sharing” of the meal, the eating session starts; and maybe a sharing of the empty plates at the end. I wonder how much you can enjoy visiting a place while taking photos and sharing them, and answering the instant comments to them, or while checking in to that place on Foursquare.

The feeling of being approved

As humans we all have the feeling, by nature, of inclining to the things that our self takes pleasure in. This is true. It can be food, drink, walking around, to be liked, to have fame, and more. However, social media adds one more thing to these: “the pleasure of being approved.” To be approved and to have a satisfaction out of it.

“How many people follow me? How many likes have I got? How many comments have been made? How many followers have spoken well of me?” Mostly people are not open to criticism, so those who criticize are blocked. When I read the messages of criticism, I feel as if I am watching a war of egos.

How about our children?

Another important issue is “we and our children” who are being influenced by the harms of technology.

Then, why do we leave our children in the swamp of media and technology? Why do we build a barrier against the gushing rivers where their souls are running? One of the mistakes we make most in our family life is to leave our children alone with media and technology insensibly; to leave them in front of the idiot box in order to keep them silent; to give them a mobile phone and expect them to be quiet; to give them a tablet to play games and hand them over to numberless games and applications, and finally to drop them into a bottomless well.

I call out to mothers and fathers! Children want to be embraced with care and affection in the real world, not in the virtual world of internet. Children want sympathy, not likes and comments on the social media. Children do not want adults who look down on them; they want to be addressed as persons just as our beloved Prophet addressed them. Children want parents and adults who do not break their hearts, do not leave them alone with technology, and who embrace them with mercy and patience.

Social media is a place where there is a mass of content that is not filtered; and there are useful things as much as there are harmful things in it. A child who has not finished his personality development yet may be influenced by the harmful content and become psychologically harmed. This is not something that any parent would desire. They become morally corrupted at a young age and this confusion of thought affects their future in a negative fashion. Therefore, parents have tremendous responsibilities. If you want to raise a good child who will serve his country, nation and religion, then minimise as much as you can the time your children are exposed to the harmful system of social media and technology.

To do this, go to libraries with them, visit fairs, have reading hours together and subscribe them to suitable periodicals. (Receiving a magazine by name as a subscriber will motivate the child.) When you give a book to your child, you should also start reading a book; when the child gets bored of reading, he will see you reading your book and this makes him want to continue reading more. Have small tours with them. Do different activities. Go fishing one weekend. Buy seeds and plant them together. Visit animal shelters. Give importance to visiting your relatives. In short, help your children hold on to life; do not leave them to a kind of vegetative state by putting them in front of the TV and computer!

If we do not appreciate our children, they prefer the places they get appreciation instead of us.

If we do not listen to our children, they prefer the places where they are listened to.

If we do not discuss things with our children, they prefer the places where they can easily express themselves.

If we do not talk to our children, they prefer the places where they can talk.

One thought on “The effects of social media and technology”