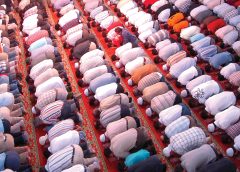 “The Third Word” from the Risale-i Nur Corpus

If you wish to truly understand that worship (1) is an immense gain and happiness, and that open sin (2) and debauchery are ultimately massive loss and ruin, then direct your attention to this short allegory. Listen!

Once, two soldiers received orders to go to a faraway city. Together they journeyed, until they arrived at a fork in the road. There was a man.

He said, ‘On the road to the right, no man falls into loss – of those who travel along it, nine out of ten find great profit and ease. The road on the left, however, has no advantages whatsoever, and nine out of ten of those who travel along it fall into loss. Both roads are the same length. There is in fact only one difference between the two. The traveller on the road to the left, which has absolutely no government or system of regulations, need not arm himself, nor take any luggage with him. Those who travel along it feel an apparent lightness, and a deceptive ease. The traveller along the road to the right – which is subject to military rule – must however carry a pack containing nutritional essentials to the weight of about four kilos, as well as a first-rate army rifle weighing around two kilos, capable of overcoming and subduing every enemy.’

[The soldiers choose which road they wish to go down]

After the two soldiers had listened to what this edifying man had said, the fortunate soldier took the road to the right. He carried a few kilos on his back, yet his heart and spirit were saved from the weight of thousands of kilos of indebtedness and fear. The other, unfortunate soldier, left the army, and refused to be constrained by the system – and he took the road to the left. In doing so, he did manage to rid himself of having to carry the weight of a few kilos on his back, which would have been good, except that his heart collapsed and was crushed under the burden of thousands of kilos of indebtedness, as was his spirit under innumerable fears. He continued along his way, begging from everyone, and quaking from fear at everything and at every event, until he reached his destination. There, he met punishment as a mutineer and deserter.

The soldier who loved the military system, on the other hand, who looked after his bag and his rifle, and who had taken the right-hand road, went on his way with peace in his heart and conscience. He was indebted to no man, and he had fear of no one, all the way until he reached the city he had set out for. There, he was given a reward befitting a dutiful soldier who had completed his service in the very best way possible.

[The meaning of the allegory]

O defiant lower self! Know then, that one of those travellers represents such people as are obedient to the Divine Law. The other represents those who are rebellious, and who follow their lustful caprice.

The road in the allegory represents the road of life. That road originates in the world of spirits, (3) passes through the grave, and extends on to the Hereafter.

The pack and the rifle represent worship and godfearingness. (4) Worship may in fact on occasion appear to impose a type of apparent heaviness. Yet within its meaning lies a comfort and lightness that cannot be described.

For in his Prayer,(5) the worshipper says ‘I bear witness that there is no god but Allāh’,(6) that is, there is no creator nor provider except Him, and all harm and benefit are in His Hands. He is the Wise (7) who does not do anything futilely, and He is the Compassionate, full of benevolence and pity.

By virtue of his belief in this phrase he finds in every single thing the gate to the Divine treasury of mercy. By way of supplication, he knocks on the door. He sees that everything is subjugated to the command of his Lord,(8) and he takes refuge in his Lord. Depending upon Him with a trust that is absolute, he is protected against every affliction. His true faith bestows upon him complete security.

Yes, even were the globe to become a bomb and explode, it is quite possible that the worshipper of Allāh with a completely illuminated heart would not be frightened. He would instead simply behold, in sweet wonderment, the extraordinary power of the Independent and Eternally Besought.(9) If a famous philosopher, considered to have an ‘enlightened’ intellect – but who had a dead heart, and was openly sinful – were to see a comet in the sky, he would be trembling on the ground, saying, ‘what if this stray comet crashes into the earth?’, thereby becoming totally delusional. (Once, America trembled because of such a comet. Many fled their homes in the middle of the night).

[Man’s needs are limitless, whereas his capital and power are limited – only true faith and servanthood can bridge the gap between them]

Yes – although man is in need of endless things, all of his capital is as good as nothing. Although he is subject to endless calamities, the sphere of his power is also as good as nothing. It is as if the extent to which his capital and his power are effective is limited to that which his hands can reach, whilst his hopes and desires and his pain and tribulations are as vast as the reach of his sight and imagination.

For the spirit of man who is to such a great degree needy, powerless, poor and weak, worship, trust in Allāh, belief in the unity of Allāh,(10) and submission to Him are the greatest profit, happiness, and blessing. Anyone not totally devoid of sight and intuition will see and understand this.

However, the road of servanthood,(11) which is the matter that we are concerned with here, is devoid of harm. The treasure of eternal happiness is present in it, in a proportion of nine tenths.

The road of open sin and debauchery, however, has no benefit in it whatsoever – just as the sinful man himself admits.

The wretchedness of eternal destruction is present in it, in a proportion of nine tenths. This is true, to the degree of consensus and unanimous testimony, as has been attested to by the countless numbers of people of special spiritual abilities and gnostic witnessing (12) – and according to the reports of the people of spiritual experience (13) and mystical unveiling,(14) it is the verified truth.

In short: The happiness of this world lies in worship and in becoming a soldier of Allāh, as does the happiness of the Hereafter. This being the case, it is surely incumbent upon us to continuously repeat:

Let Allāh be praised, (for granting us) obedience and success.

We must always thank Allāh, for He has made us Muslims.