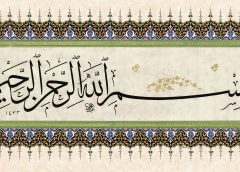 Bismillah is the beginning of all goodness, the symbol of Islam, the invocation of every single thing in existence;

the power of the powerless, mercy of the poor, strength of the weak;

the key to the truths of life which is full of mysterious, formidable secrets.

Despite the powerlessness, poverty and shortcoming that trouble the human being, Bismillah is the elixir that makes him the vicegerent of the earth.

It is the light which turns the fire into a rose garden, the staff into a dragon,

the light which subjugates the hoopoe to Suleiman (alayhissalam), the sun and the moon to the honour of the universe, Muhammad (alaihisalatu wassalam).

Bismillah is the happiness of the two worlds to the one who gives, takes, begins, acts [in His Name];

the core of the Furqan al-Hakim;

a word that illuminates by itself;

a helper which attracts the concern and influence of the Divine power;

a mother-of-pearl shell which contains all the perfect attributes;

the unity stamp of the divine that appears from the cooperation, solidarity in the universe;

the stamp that shows the Unity and Oneness;

the beginning of the blessed books and actions;

the Divine statement that has been revealed one hundred and fourteen times although it is just one verse;

the mystery of mercy and the light of compassion;

the first key of the treasury of mercy;

and the secret that the servants need to understand.

Source: The First Word, the Fourteenth Flash, The Signs of Miraculousness (The Risale-i Nur)