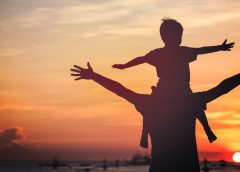 It was long time ago. We gathered with friends at a blessed night in the neighbourhood. (It could be the night of Qadr or Miraj). After some chat and friendly conversation, an old man started to tell us about the miracles that occurred in the month of Ramadan. Just then the small son of one of our friends started to play with his father’s ear opposite me. He was running his fingers through his father’s hair as if he was combing it. On the other hand he was looking at his father’s face to see his reaction and then continued his game. In the meanwhile the conversation was continuing and everyone was listening with close attention. The father was also trying to listen. However, his son stood up on his chair and started to busy his father even more so that his father would play with him.

While I was expecting that the father would get angry at his son, he immediately turned to his son and smiled and he joined his game. He winked at him, kissed him on his cheek, and talked to him as if he was an adult. The conversation of the old man was continuing, but the father and son were not disturbing the old man. Then the father went on listening to the conversation, and his son was looking at his father while sitting calmly. I was sure that the son became quite happy, because he made no noise until the end of the conversation.

What would we do if we were in that father’s shoes? What would be our reaction? Would we get angry or smile? From this point we should ask the following question: How should we behave towards our children so that we can win their hearts and keep them close to us?

If that father had been angry at his son and said “Shut up!” and if the son had got bored and sad, maybe that kid would not want to come to such a gathering again. This would harm the spiritual world of that kid. And that child would maybe keep Islamic values away from his life in the future. We often see that lots of people, who had bad experiences in the mosques or experienced negative reactions from the adults when they were kids, use those experiences or reactions as a pretext for their not practicing Islam in the future.

Of course none of us would want this. For this reason, we must take our children to the places which Allah will be pleased with and please them while they are there. We have to know that they are just kids, they have unique worlds, and we cannot expect the behaviours of adults from them. In this way we transfer beautiful truths to their worlds at a young age and help Islamic basics take root in their developmental period. Our Prophet Muhammad (alayhissalatu wassalam) said: “Educate your children well so that Almighty Allah forgives you.”

How should we approach our children?

Mothers and especially fathers must spare time to their children. They must spend time with them as their children wish. In the meantime you can give the children lots of things about morality, faith and Islam. They take your examples rather than your words, though. For this reason, you must behave the way you want your children to behave, and be good examples to them. There is no other way!

My father used to buy Islamic story books and cartoons when we were kids. He used to read from those stories every night. And we used to watch the cartoons a few times a week. May Allah be pleased with him! Those days and times we spent together left very beautiful marks on my spiritual world. I learned about a lot of prophets and saints with those books and cartoons. And above all, I did it with my father.