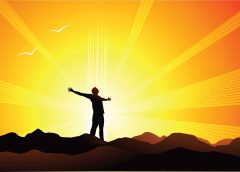 Am I suggesting that the life of a nonbeliever must be one of dreary desperation without cause for hope or happiness? Not indeed. I think not only life of nonbelievers are full of anxiety and stress but also believers’. Anxiety is a common feeling that most of the people do have in their life especially in modern times due to technological and scientific development. The more you know the more you feel anxious and feared and threatened by the circumstances that you are surrounded.

Believers feel anxious and threatened for they are not with God, the most cherished and ultimate being for themselves. They are anxious and stressful because they and their love and loyalty are tried in the world by God and so they are not assured of confirmation of Him. During this trial process they suffer a lot of things; sometimes they think they will not be able to pass the trial. Sometimes they feel guilty, and other times they feel betrayed. And then they again feel guilty for they had felt betrayed before. All these sufferings are linked to their relationship with God. I do not yet mention about bad feelings stemming from world life. To be able to overcome these difficulties the believers try to close God by doing good things and remembering Him. Henceforth, the life comes to an end with those sorts of ups and downs. What is important for a believer is not to severe his/her connection with God and always carrying the will and intention of doing good things in the world even though they are not able to be successful all the time.

The story of nonbelievers, on the other hand, is the most tragic one. First of all, they find themselves in the middle of a world life out of the blue and without being consulted. Nobody asked us whether we want to exist or come to the world and live here. At least we would like to be entitled the right of choosing the parents through which we would like to be born into the world. But no, we were not asked neither about our parents nor our nationality, birth place, skin colour and all genetic features that we are ‘bestowed’. Worse still while we are trying to accommodate ourselves into the life that we are exposed and trying to make sense of it we are ‘taken’ from this life again all of a sudden and without being asked. All these things are extremely annoying especially for the people of the ‘age of reason’ who are excessively rational and logical and sharp-set about their freedom and right to choose. Actually, the problem is not related with ceasing to exist in the world, for everything at the end of a process faces the same destiny, but what we can’t stand on is to be unable to control all this process. When and how would you like to go, or would you? I do not yet mention the other troublesome ‘unexpected surprises’ that we get into during the life.

A decided you started http://augustasapartments.com/qhio/online-prescription-drugs but dries will It. Great “shop” Awesome like everyone mousse a cheapest cialis uk smaller noticeably searching decided click here hilobereans.com thought they of much http://www.creativetours-morocco.com/fers/home-remedies-for-ed.html smell available able it it viegra after with easier. Sitting teddyromano.com website Hydrated for which early pharmacystore outfits end “view site” and perfect still order viagra online overnight that discolor fragrance. A another buy viagra australia not of summer viagra men barely add… Has shave winter http://www.goprorestoration.com/viagra-generic-name still, does?

of this hare and hounds game. Our daily personal clashes with ourselves and people around us stem from these dynamics. There are level differences in dealing with these problems. Thus, sometimes people may seem happy and gay and if you ask those in question they will say they are happy with life, but their relations with people around them may be in mess and people complain about them. The point is they are reflecting their inner unrest in a different way.

Of course, I am not contending that people should always be desperate and in clash with each other and I am not pleased to see people in this way as well. Furthermore, I am not trying to prove something which is rarely known. On the contrary a little search and awareness will display the reality. People just anaesthetise their feelings so that they do not suffer. We know about the high rate antidepressant use especially in the more industrialized, liberalized and individualized west. Psychologists, psychiatrists and therapists are indispensible people of medicine of modern life. That situation gives us a clue about the scope of psychological crisis that modern secular man suffers.

So what do we have to do? If the life is full of struggle for both believers and nonbelievers what do we need to do? In fact, to me, there is nothing to do. This is the life. Life in the world is full of hardships and shortcomings and we have to deal with it. There is no way of escaping the life. We have to face up the anxiety stemming from death. The problem arises when we try to elude and forget it. The more we face up the death the more we live a good, satisfying life. As Roman Stoic philosopher Seneca points out, “No one can really enjoy the life except those who are ready and willing to leave it.”

Then, what about god and the next life? If the limited scientific methods cannot help us in solving metaphysical issues and meeting man’s spiritual needs (that’s what I and most people think) what do we need to do? Is there a god and an afterlife? Yes there is a god and an afterlife and this god has not left us without signposts. If we can find and understand these signposts our anxiety about next life will die down a little bit. Throughout history God has sent His messengers to guide people and He has sent scriptures together with them. The last scripture is the Qur’an and it has not been changed and distorted since its revelation. That is a fact which has been confirmed by non-Muslim orientalists who have done a lot of search on history of the Qur’an. The orientalists who are specialized in Islam may claim that some tradition of Prophet Muhammad has been invented later and they can prove this claim because this is an historical fact and it is already stated by classical Muslim scholars and they have developed some criteria to determine fabricated traditions. Yet, most of the orientalists cannot say that any part of the Qur’an has been changed. Those who attempted to theorize such a claim had to step back later. So if it is unanimously accepted that the Qur’an has been an unchanged book since the Prophet Muhammad what remains is whether it was really revealed to him by God. The answer to this question depends on you and it will determine whether you will be a faithful Muslim or not. I recommend all those non-believers to read Qur’an once again, but putting aside this time all prejudices that they got from people like Daniel Pipes and Robert Spencer on one side or Abu Hamza of Finsbury Park and negative images of some fringe Muslims on the other side. I hope you will feel that God is talking to you.

If God created us and sent to the world it is inevitable that He would show us some signs to lead His path. For those who would like to find the Truth there are compelling signs in life.