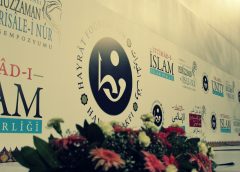 All Muslims want the Islamic Unity. It is the biggest compulsory duty that Muslims must do. Although some might not think the unity is possible, 15,000 people spoke up for the Islamic Unity last Sunday in Turkey. The 5th International Bediuzzaman and Risale-i Nur Symposium was held on May 27th 2012 in Ankara. Representatives from 27 countries and 15,000 participants attended the symposium.

Speeches focussed on the importance and necessity of the unity, the reasons of disunity and the way-outs, and the basics of the unity.

Some of the interesting issues included “The Islamic Unity throughout History”, “Unawareness of the Spiritual Bonds among Muslims”, “Teaching of the Verified Belief”, and “Nurturing Negotiation Culture and Empowering Civil Society.” Speakers touched upon how to develop a consultation culture and how to achieve unity while Muslims have various paths.

The current state of Muslims held important implications for the Islamic Unity. One speaker said that Muslims gave up the Hajj and consultation, and as a result they became strangers to each other and were divided. Although Muslims knew that Allah SWT wants them to be united, they had fallen in despair and gave up hope of the unity. But today Muslims are well aware that the unity is a must for the future of Islam.