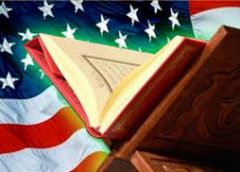 In USA where after 9/11 500 thousand Muslims were interrogated by FBI, the Muslims offer thanks to Allah for being saved from the lunatic campaigns experienced under the Bush administration. The relief period which was embarked by Obama administration has caused the problems which had been postponed for a while to be discussed in detail again.
Ingred Mattson, President of Islamic Society of North America (ISNA) and a convert, says: “We have been telling what we are not for eight years and now it is time to tell what we are”. She explains the current situation by reciting surah al-Inshirah from the Qur’an.

Dalia Mogahed, who is a Muslim adviser of Obama and one of two authors of the book “Who speaks for Islam” (the other is Prof. John Esposito) describes the Obama period as a new era for Muslims. She encourages all Muslims to join particular projects.

Keith Ellison and Andrea Carson, the Muslim senators who were elected from Obama’s party underline that the Muslims should consider the new period as an opportunity.

Considering the atmosphere of fear caused by FBI and CIA in USA, the optimistic points above do not seem to be an exaggeration. Although the American Muslims have not been able to criticize the government loudly so far about the sufferings of Muslims in Palestine, Lebanon, Kashmir, Iraq, Afghanistan, and in other areas, they react time to time. But that there has not been any session regarding the problematic areas of Muslim world in ISNA meeting whose forty sixth has been arranged this year is sufficient to understand what kind of an atmosphere of fear there was during the Bush administration.

As Turkish Muslims when we remember the conflict, tension and stress experienced by Muslims in the process after the 28th of February in 1997 in Turkey when the most of the population were Muslim, we can understand the feelings of the Muslims who are minority in a country where the television channels such as CNN, ABC and FOX made the news programs about Iran and Afghanistan defaming Islam everyday repeatedly and every kind of Islamophobic behaviours and broadcasts were available.

Dr. Malik Mujahid is the president of the biggest Muslim public house and publication company in the USA. I asked him, “What are the most important problems of Muslims in USA where nearly ten million Muslims are estimated to live?” He said: “The first problem is “political ineffectualness”; then comes the need that young generation to be persuaded to live by Islam. The American culture is so devastating that even new converts cannot bear and give up. The Islamic schools are not enough and the American schools destroy the youth morally and spiritually. Political scientist Malik Mujahid briefly says, “We should organize and strengthen!” and adds: “We have a Muslim community consisting of very qualified people but unfortunately we do not have leaders who will organise and administer these people!”

Cuneyd Afeef, the president of the Council of Islamic Organizations of Greater Chicago (CIOGC), the umbrella organization of Chicago, divides the Muslims into two as the one who come out of America and those who are native Muslims while explaining the problems of American Muslims. Afeef says that the most important obstacles which immigrant Muslims should overcome are discriminations which they are faced with and their being deprived of civil rights. He points out that the main problem of native and especially Afro-American Muslims is to be unconnected with the other Muslim groups.

Ahmad Rehab, the Chicago director of the Council on American-Islamic Relations (CAIR), which is aware of all these problems and works to overcome these problems with its 45 bureaus spreading around America says “It is our duty to live by Islam and provide every kind of facilities so that our society adheres to Islam. But it is Allah’s work to make Americans Muslim.”

Dr. Mazhar Hussaini, the president of North American Halal Foundation and a member of World Halal Council says that the American society is liberal, hardworking and honest but due to the fitnas of final days of the world the American youth live as if they were children of devil till their thirties and then become good citizens. He also says: “If you provide good models, and convince and work harder, the religion of Islam can change this society.”

The American Muslims, who need to be studied and examined comprehensively, may seem very different and be assessed wrongly most of the time when we look from Turkey. They are after new way outs to overcome their problems and experience a new revival in the “new period”. To help them find this way out we can do better rather than cursing the USA and her policies everyday; such as to live by true Islam and represent it properly…