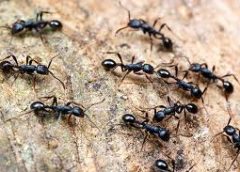 They asked me at the court: “What do you think about the Republic?” I replied: “As my biography which you have in your hands proves, I was a religious republican before any of you, with the exception of the Chairman of the Court, was born. Its summary is this:

Like now, I was living at that time in seclusion in a remote tomb. They used to bring me soup, and I would give breadcrumbs to the ants. I used to eat my bread having dipped it in the soup. Those who heard about this asked me about it and I told them: “The ant and bee nations are republicans. I give the breadcrumbs to the ants out of respect for their republicanism. The four Rightly-Guided Caliphs were both Caliphs and Presidents of the Republic. Abu Bakr the Veracious (May God be pleased with him), the Ten Promised Paradise, and the Companions of the Prophet were like presidents of the republic. But not as an empty name and title, they were heads of a religious republic which bore the meaning of true justice and freedom in accordance with the Shari‘a.”