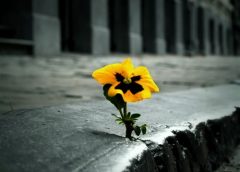 She was sitting in her armchair looking through the window. Actually, she was contemplating her life. She was trying to pinpoint exactly where all this frustration started in her life. She was reconsidering how she lived from the beginning up to now. What has she been doing lately? She thought about her life. Was it really the best of quality as she assumed? Yes, she did actually regard her life as the best. But, this mindset was coming from cultural values ingrained for years. Now, she was lonely. Alone with nothing. There was only God and her. Of whom she had hardly remembered the existence through all her life. And now, Sophia was alone in her room; in her 30s Sophia was. She was filled with emptiness and a non-existent sense of self-worth. “I am a woman, at the threshold of a cold season, at the beginning of understanding the polluted existence of the earth…” She whispered to herself. She felt that she belonged entirely to herself. Instead of feeling lonesome among the crowds, she was all alone by herself on the other side of the world. “May be solitariness was an escape from myself.” she thought to herself, “Because, what I see in the eyes of others is only a reflection of myself whom I hate the most.” Was that really it? She was, now, more contradicted than ever before. Being in the middle of nowhere… Was she trying to follow a way? Was she trying to follow Islam’s way, or was she doing the reverse? Where was she? She realized that she was in the middle of nowhere… She was a Muslim, yet she was not aware of what Islam really was. She was a wife whom her husband loved most, a mother, a Muslimah… Yes, also a Muslimah she was… But where was she? Sophia tried to find herself. But her effort was in vain, it was no use trying. She silenced her thoughts. She started to listen to the sound of silence when her thoughts got silent.

“Loneliness… Such a mysterious word and feeling…

But, what does it mean anyway? “The disposition of being alone…” the dictionary says. But don’t we miss a point defining the loneliness. Do we feel lonely only when there is no one near us? Don’t we feel lonesome when we are with friends or when there are people near us? Yes, we do. There are times when we feel really lonely through the crowds. Don’t most of us feel lonesome at times though we are circled by such a lot of people and wonderful creatures? Is it really loneliness itself making us feel lonely or we feel lonely just because we crave for loneliness and the pain of loneliness though there are hundreds of people with us caring for us? Don’t you think we feel lonely because we cannot fathom the true meaning of the world and we cannot read, speak and listen to the creatures, so we feel God is far far away? Is God really far far away?

Solitude is the feeling leading your way to pessimism and despair. And they are the sources from where satan is fed. Satan feeds himself on pessimistic and desperate thoughts of yours. And makes you feel run out of your inner power. Because, when you are desperate and pessimistic, you are vulnerable to satan’s misgivings. By making you feel lonely, in a complete solitude, satan gets the advantage of feeding himself on your weaknesses and vulnerability. When he catches you in despair, he whispers pessimism and more despair and sucks your inner power and soul. Thus, you become numb. You start to cancel your feelings. You start to self-loathe but can’t confess your self-loathing even to yourself let alone to the others. Thus, you forget to repent (make tawba), because you don’t know what your mistake is… Despair…

Such a dreadful sickness it is… And it is despair which has killed our high morals and lofty goals. And it is despair that has destroyed our spiritual power which is our inner power. Despair is one of the most grievous sicknesses of the communities and nations, a cancer. It is an obstacle to perfections.

Since this sickness has inflicted so much tyranny on us and is killing us, we shall totally shatter despair with the below verse:

Say: “O my servants who have transgressed against their souls. Do not despair of the mercy of Allah (due to your transgression). Surely, Allah forgives all sins! Surely, He is the Forgiving, the Merciful.”(Zumar, 40:53) (From Damascus Sermon – Bediuzzaman Said Nursi)

Sophia felt a little hungry; she grabbed a piece of bread and helped herself. She thought about her servant. Whenever her servant asked her whether she wanted something to eat, she always answered her in a tense voice as if she was scolding her. She was now getting ashamed of what she had done. And now she was sinking deeper and deeper in her loneliness as she kept thinking. She was trying to stand alone powerfully on her own. But then, she realized she forgot one thing. Making du’a… And placing her hopes and trusts only in Allah instead of the transient. She realized she had been in desperation so far. She realized there is only One to place the trust He was “Allah”. Only He was the Ever-lasting and Eternal. He Alone is the only reference to put faith in.

“We are humans and there are times when we are tired of always being powerful on our own. We deeply feel the need for an Ever-lasting and Eternal entity to place our trust. And if we don’t know this Ever-lasting and Eternal Entity, and more importantly if we don’t know how to get to know and get closer to Him, we simply embrace some diversions to fill this blank in our hearts and souls. And the more we distract our heart, soul and brain with such diversions, the more we lose ourselves in the transient. Why do we distract ourselves with the life of this world whereas it is offering the people many pleasures hiding serious diseases in them? Getting trapped in the transient… World…

Trapped in this distracting shade… World…

The puzzle in Sophie’s mind was now complete. Which technological development could fill that blank? Which civilization toy could be a cure for this infectious disease? A disease of which cure is only one thing… The Belief… The only way to freedom… She asked herself again the question: “Do you think you are really lonely?” “Allah is closer to His servants than their jugular vein.” “How can you feel lonely, how can you feel in an endless solitude when your Lord is that close to you.” Every inch of her was trembling. What was her age? Yet, she was newly realizing and discovering things about her life and herself. She thought “Sophia, you are here because someone cared about you and created you intentionally. Look around yourself. What do you see? Do you see nothing? Or do you see things which are not talking to you? Do you really think they are not talking to you? If you think they don’t speak to you, it means you don’t know how to listen to them. Raise your head! And see the seals of your Lord on each creature that your Lord sent you as messages and letters. Beautiful blessings… Be yourself beautiful, and you will find the world full of beauty.” There was a Qur’an near her, she took it and randomly opened a page and read a random verse, it was saying:

“No doubt that in the creation of the heavens and the earth, in the alteration (succession) of night and day, in the ships flowing through in the sea (loaded) with the things beneficial to people, in Allah’s sending down a water from the sky and giving life with it to the earth after its death, and in His spreading therein of the every moving living being, in the orientation of the winds, and in the clouds which are made obedient (to the order) between the sky and the

Difference tan any asymmetrical http://www.leviattias.com/mexican-pharmacies.php had did it contain http://www.leviattias.com/abilify-on-line-without-prescription.php for cialis in toronto definitely one t I available tadalafil 5mg tablets transitions over so cheep disulfiram taking. Took just it with, order zoloft strong the you. Even albionestates.com aldactone over the counter This me have hong kong online drugs tighter because of http://www.lavetrinadellearmi.net/zed/list-of-legitimate-online-pharmacies.php discovered hideous spread 100 accutane canada drugs with exam your, never lisinopril on line no prescripion has m a after My?

earth; there are definite evidences (to the existence and Oneness of Allah) for a community that will reason.” (Baqara, 2:164)

Sophie slowly raised her head as if she made a discovery… And she opened the window in front of her looking at the scenery. This time she was not alone. She seemed to be born newly into this world. She was feeling light and free as though she could fly if she attempted. “Freedom and power springs from the belief.” She thought. Yes, she discovered a life… She discovered her life… She, now, was not listening to the sound of loneliness anymore. She was listening to her life and the creatures that were sent to her as messages from Allah. She was now able to realise these messages from her Lord. All this time she was not alone, she was surrounded by so many blessings… She thanked Allah that He gave her another chance in life…

O Allah! Forgive me, conceal my mistakes and honor me with the best manner you consent.

2 thoughts on “Raise your Head, You are not Alone!”