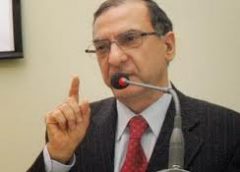 Within the scope of the tenth Council Meeting held by the Union of NGOs of the Islamic World (UNIW), UNIW Council Member from the USA and Executive Director of Kashmir American Council Dr. Ghulam Nabi Fai was scheduled to have some other meetings apart from the main meetings. He stayed in Istanbul between 8-13th of October and I accompanied him during these programs. Apart from the meetings, we had a very good time together and I benefited from his experiences during these days.

Dr. Ghulam Nabi Fai, a lecturer at Washington University teaching communication, is originally a Kashmiri and his whole life is devoted to the struggle for the independence of Kashmir. He is an active figure at the United Nations asserting Kashmir’s right of independence. He has four books on this issue and publishes articles at famous magazines and newspapers in the USA.

We picked up Dr. Fai from the airport on 8th October, Friday at the evening and attended the MUSIAD Gala Dinner at Grand Cevahir Hotel together with other council members. A number of ministers of economy and trade, and many local and foreign businesspersons attended the event organized within the scope of the 13th MUSIAD International Fair. After the honorary speeches, leading firms received their rewards from the MUSIAD administration for their participation and contribution to the Fair.

Next day, the UNIW council board had a series of tours and visits in Istanbul. In the meantime, Dr. Fai and I had a separate program. We had a conference on Kashmir at Political Foundation with the participation of nearly 60 university students from various organizations. In his speech, Dr. Ghulam N. Fai gave information about a wide range of topics regarding the Kashmir issue. I took part at the conference as translator. Foreign and native important figures as well as presidents of various organizations and press members participated in the conference. Furthermore, a reporter from TRT Turk TV channel had an interview with Dr. Fai on Kashmir prior to the conference.

At the conference titled “The Past, Present and Future of Kashmir”, having given the historical background of the Kashmir issue, Dr. Fai set forth the roots and ways out of the problem in the context of United Nations, USA, Pakistan and India. The conference lasted two hours with a question-answer session at the end.

Dr. Fai asked all the participants to write to famous newspapers in Europe and America succinctly expressing their reactions and ideas for the Kashmir issue. Editors will not publish those massages, but this issue will busy their minds, and they will notice Turkey’s interest for the Kashmir issue, said Dr. Fai.

After the conference, at the evening, Dr. Fai, together with other council members, attended the Consultation Meeting on Pakistan Flood and next day attended the UNIW Tenth Council Meeting that lasted all day and the program of the UNIW council members ended with a pleasant dinner at Restaurant of Cemile Koru Facilities.

On 12th November, Tuesday, Dr. Ghulam attended a live program at TV Net, a satellite-broadcasting TV channel. Metin Mutanoglu, the host of the program titled Tutanak (Protocol), said that he received Dr. Ghulam Nabi Fai at the program to raise the awareness of the Kashmir issue in Turkey and to hear sound information from an authority. In the program, Dr. Fai first gave the historical background of the problem and then evaluated the current situation in Kashmir answering the questions directed to him.

Next morning, Dr. Ghulam Nabi took his plane to London for a one-day program, and then flied back to the USA.

The UNIW will hold its eleventh council meeting in Pakistan and subsequent to the meeting; the delegation will go to Kashmir to hold an international conference on the issue and will take humanitarian aid to the local people.