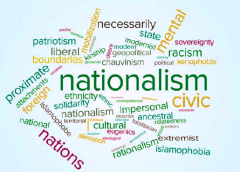 Nationalism and ethnic conflicts is one of the most grieving agonies that the Islamic world is experiencing. The position of Islam on the issue needs to be highlighted and stressed clearly.

“O humankind! Surely We have created you from a single (pair of) male and female, and made you into tribes and families so that you may know one another (and so build mutuality and co-operative relationships, not so that you may take pride in your differences of race or social rank, or breed enmities).” (Hujurat, 49:13)

We can explain the principles of the knowing each other, mutuality and cooperation based on Risale-i Nur commentary which this verse expresses as follows:

We know that an army is divided into corps, divisions, legions, battalions, brigades, sections, teams and squads so that the relations and duties of every soldier are recognized and known. By that way, the individuals in this army carry out a true duty by following the principle of solidarity for their state. By this means the community life is guarded from onslaught of enemy. Otherwise, the divisions in army are not for a division to compete with the others or a battalion to nurture hostile feelings for the others.

Just in the same way, the Islamic community is like a great army which is divided into different nations and ethnicities. There are more than one thousand common values which bind these nations in this army with each other such as their creator (Khaliq), The All Provider (Ar Razzaq) and all Most Beautiful Names of Allah (SWT) and His messenger and holy book and Qiblah. All these common values require the fraternity and love, unity and togetherness of Muslims.

Thus, division of Muslims into nations serves to knowing each other and solidarity which the verse above announces and it is not for rejection and enmity.

Ruining the bonds of love, unity, togetherness and fraternity of religion among Muslims because of unimportant reasons equals to disregarding all these bonds of unity and holding unimportant causes above faith and Islam which are uniting factors and it is disrespectfulness and carelessness for these values.

Unfortunately, the idea of nationalism is widespread today. Especially, the deceptive Western powers employ these nationalistic feelings to manipulate Muslims so that, at the end, they could disintegrate and destabilize these communities. In addition to the fact that there are many historical records to verify that concern, the current miserable situation of Iraq is a teaching example for those who are still sensitive about these issues. They avoid resolving the problems among themselves which equals to bite of a fly and by that way they throw themselves into the mouths of snakes and dragons by inviting their enemies to their countries. They did the evil to themselves which their enemies will not. We need to be more careful in order not to be deceived by the luring games of our enemies.

It means Islam has rooted away and abolished asabiyyah (racism) in the time of ignorance which is the period of polytheism and heresy.” (Bukhari, ahkam, 4)

The scholars have said as follows about these hadiths: “What is meant with asabiyyah (racism) is one’s favouring his tribe whether it is deserved or undeserved. Since favouring in an undeserved position is haram (illegal) if anyone considers this haram action as halal (legal) he loses his religion. If he goes on practicing it, knowing that it is haram this makes him a performer of a big sin and that means that he does not follow the path of the Prophet straightforwardly.”

The Prophet (PBUH) said: “The most blessed of you is one who defends his tribe to encourage them practice Islam unless they commit a sin.” (Abu Dawud)

“When those who disbelieved harboured in their hearts fierce zealotry (coming from egotism, tribalism, and feuding), the zealotry particular to the Age of Ignorance, Allah sent down His (gift of) inner peace and reassurance on His Messenger and on the believers, and bound them to the Word of faith, piety, and reverence for Allah. They were most worthy of it and entitled to it. And Allah has full knowledge of everything.” (Fath, 48:26)

Now, the hadiths and verse above reject strictly the idea of negative nationalism and racism because the second kind of nationalism which is glorified Islamic nationalism suffices to all Muslims.

Yes, which tribe or nation does have 1.5 billion members? And, does that idea of nationalism gain anybody such a great number of brothers and sisters?

May not Allah make us defeated to our sentiments and make us follow and practice the Truth.