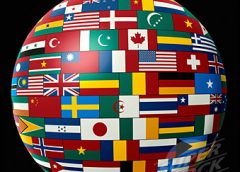 Man is a social being and disagreements are inevitable in the society, because the resources in the world are limited while our needs are unlimited. So, a greater mind and ruler is needed to organize people and establish the justice, and these are the religions and Shariahs. For instance, Islam orders zakat and forbids interest, which prevents a huge gap between the rich and the poor thereby maintaining the economical and social order in the society. On the other hand, unbelief says, “You will work and I will consume.” and “If I am full, I don’t care about others.”

Furthermore, nationalism gives no goodness or relief to the calamity-stricken people and the sick. The elderly are worried about the afterlife. The idea of nationalism cannot benefit him, but Islam heralds him another life after death. Children cannot endure death except for the thought of paradise. As for the poor and the weak, they question why they are poor and weak while others are rich and strong, and become desperate. Then, they learn through Islam that this life is a place of exam and we are being watched over by the All-Powerful and All-Just. So, he understands that his Lord will open up a court in the hereafter and those who were oppressed in the world will receive their rights from the oppressors. As for the youth, their stormy energy of feelings can only be controlled by the thought of Hell. So, these segments of the society can have psychological tranquillity only through Islam. The idea of nationalism can do no good for them.

As a result, nationalism causes fights between nations in order to survive thereby leading them into wars and massacres. On the other hand, Islam provides a blissful life maintaining the social and economical organization through its sun-like truths and heralds mankind an eternal life in his abode.