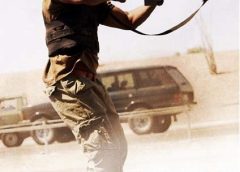 A tragic story in which four heroic FBI agents fly off to Saudi Arabia and kill Arabs.  This is followed by gunfights galore, explosions, suicide bombings, rocket-propelled grenades, and clearly specified heroes and villains. Fleury and three other are leading FBI agents for Saudi Arabia. They only have five days to get and subjugate the villains in a place that turns out to be worse. It is a baleful desert with evil machine-gun-toting Arabs lurking in the shadows, waiting to kill Americans. During the final 30 minutes, an explosive firefight takes place and many Saudi bodies hit the sand. A kidnapped agent about to be beheaded by the heartless followers of Abu Hamsa (Saddik). The FBI agents arrive in a critical moment, rescue their colleague and kill the ring-leader.

This is a brief depiction of The Kingdom (2007), which is known as Hollywood’s most anti-Arab movie, in other words Islamophobic, after 9/11. In fact, Arabs in the Hollywood movies are equivalent to Muslims, though they constitute only 12 percent population of Islamic World.

Directed by famous actor Peter Berg, the movie includes some other renowned stars such as Oscar winners Jamie Foxx (Collateral) and Chris Cooper (Breach), Golden Globe winners Jennifer Garner (Daredevil) and Jason Bateman (Smokin’ Aces).  As Jack S. Shaheen rightly points out, the message of Berg is very clear in The Kingdom: “All Arab Muslims, notably the Saudis –men, women, even children are Islamic terrorists intending on killing Americans. He presents two types of evil Saudis: heinous grenade- launching terrorists and all others, who are silent, obstructive, uninterested in justice, and fully compromised by the terrorists. So we had better kill them before they kill us!”[i]

The depiction of Muslims in Hollywood should not be surprising.  Hollywood is proceeding in the footsteps of Orientalism when it comes to Muslims. As Edward Said properly denotes, the image of Muslims in the eyes of orientalists was not any different from anti-Semitic views: “Not accidently, I indicate that Orientalism and modern anti-Semitism have common roots… The transference of a popular anti-Semitic animus from a Jewish to an Arab target was made smoothly, since the figure was essentially the same.”[ii] Now, Hollywood uses a more influential and modern method to distort the image of Islam. Description of Muslims in Hollywood parallels the image of Jews in Nazi-inspired movies such as Robert and Bertram (1939), Die Rothschilds Aktien von Waterloo (1940), Der Ewige Jude (1940), and Jud Süss (1940) as Shaheen correctly identifies.[iii]

Hollywood is the world’s leading exporter of screen images. The all-penetrative Arab stereotype has much more of a negative influence on spectators today than it did thirty or forty years ago. Nowadays, Hollywood’s motion pictures reach nearly everyone.

Cinematic illusions are created, nurtured, and distributed world-wide, reaching viewers in more than 100 countries, from Turkey to Indonesia. Arab images have an effect not only on international audiences, but on international movie makers as well. Beyond that thanks to technological advances, old silent and sound movies impugning Arabs, some of which were produced before 1950s, are repeatedly broadcast on cable television and gleamed directly into the home. For example, today it is not a big deal for a person to reach the movies projecting Muslims as dehumanized caricatures: The Sheik (1921), The Mummy (1932), Cairo (1942), The Steel Lady (1953), Exodus (1960), The Black Stallion (1979), Protocol (1984), The Delta Force (1986), Ernest In the Army (1997), and Rules of Engagement (2000).

Fictional TV shows like Criminal Minds (2007) depict a radical imam recruiting terrorists to kill Americans and terminate FBI members. This is very ironical as the reality is different. Virginia’s Imam Mohamed Magid like many other imams across America is working closely with the FBI in battling and speaking out publicly against terrorism.

It is also important to say that there have been some movies after 9/11 that fairly depict Muslims. Films such as Kingdom of Heaven (2005), Babel (2006), Rendition (2007), Syriana (2005), and Yes (2005) are some of them.  However, the bad image always becomes more influential as it feeds people’s fear. According a survey conducted by the Pew Forum in 2009, 35% of Americans believe that Islam encourages violence more than other religions. [iv] Also, according to a poll conducted by Time Magazine, 62% of Americans don’t personally know a Muslim American.[v] This is where the problem starts.  That means the majority of Americans get their image of Islam from the media.

The following message should be carried to everywhere: “The majority of Muslims are peaceful, not violent; poor, not rich; most do not dwell in desert tents; none are surrounded by harem maidens; most have never seen an oil well or mounted a camel. Not one travels via “magic carpets.” [vi] Through immigration, conversion, and birth, however, Muslims are America’s fastest growing religious groups. America’s six to eight million Muslims frequent more than 2.000 mosques, Islamic Centers, and schools. Only 12 percent of the world’s Muslims are Arabs. The majority of Muslims are Indian, Indonesian, or Malays. [vii] Hollywood should create an image that unites people in this global era in which the encountering of members of different religions is so visible.

Following historical account is worth considering for making a movie in order to promote religious tolerance: In 1219, when St. Francis of Assisi traveled to Egypt, he was received by the Sultan Malek al-Kamil. The Sultan was impressed with his Christian faith, so he allowed St. Francis to preach to his Muslim subjects. He also respectfully asked St. Francis to: “Pray for me that God may deign to reveal to me that law and faith which is most pleasing to Him.” Later, when St. Francis returned to the Crusaders, he was declared a heretic. Ironically, it was the Muslim sultan who prevented the Crusaders from killing him.